← Traumatic Experiences
My Perception of the Afterlife →

Thirst Trap follows four friends as they deal with sexuality, tragedy, substance abuse and wild friendships. What made you write a story about these topics? Anything pulled from your life experiences?

Honestly, the story came from some of my closest friends. I wrote a novel several years ago that was based on me coming out, and I wanted to write a novel as a follow up to it. It’s kind of like my autobiography but in my own way. I pulled from my brothers suicide, my friends abusive ex, my friends boyfriend suicide, and my friends marriage. Also, a lot of the back and forth with the witty comments are actual comments my friends have made to each other.

What kind of research did you do for this novel to ensure you captured the essence of the stories theme?

I did 4 years of research just watching my friends. I wanted to make sure that I did justice in that no matter what happens friends have each other’s backs. I think my theme in all of my books is to be open and honest or it will bite you in the butt down the road.

What character did you enjoy writing for? Was there one that was more challenging to write for?

I think in such a messed up way Ivan was my favorite to write. I loved him going from an abusive relationship to standing up for himself. The challenge with all of these characters was I didn’t want them to be too close to my actual friends. I made sure to change their appearance to make sure I could write right freely without worrying I’d they would get offended.

What is the next novel you have planned? Any involving the characters in the Thirst Trap?

I actually have another serious novel coming out in June called Silence Screams. Its my favorite novel that I’ve written. It’s my 50th novel, and it’s elements of all my books I’ve written. It’s about the aftermath of a school shooting. I’m also working on finishing the spin off trilogy to High School Queens. Sadly, Thirst Trap is a stand alone and those characters are done. 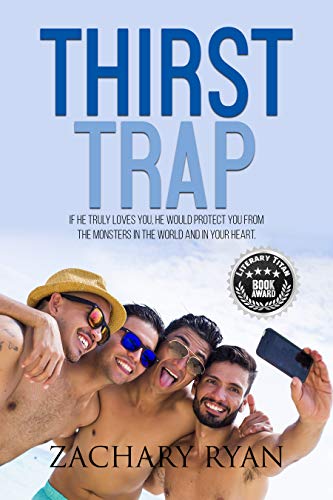 Tragedy comes in all forms, and you never know how you’ll deal with it. Four friends have all dealt with their fair share of struggles. Dillion, is an aspiring writer with writers block because of his brothers sudden death, Jesse the emotional stunted drink thanks to his boyfriend’s suicide, Ivan the abused victim just looking for a place to call home, and Leo the stubborn romantic trying to get his friends to open up, while keeping his issues close to his chest.

With these four friends, they avoid all their elephants in the room like a death card agreement between Dillion and Jesse, Ivan completely hoping his abusive lover with change or even Leo focusing on his friends problems instead of his own. Can these four friends learn to embrace and accept their own tragedy or will they be stuck in the past?

Thirst Trap is a humorous coming of age novel dealing with sexuality, tragedy, substance abuse, and the most beautiful.

← Traumatic Experiences
My Perception of the Afterlife →