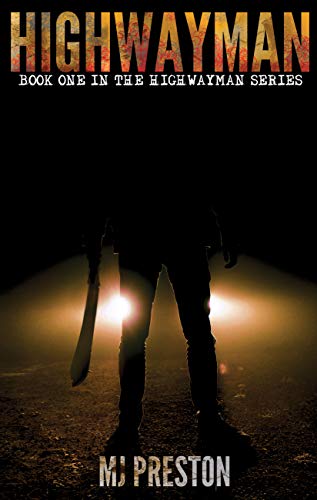 Highwayman is the first installment of the two-book miniseries by M.J. Preston following serial killer Lance Belanger. Orphaned while in college and recipient of a large inheritance that he uses to fuel his insidious desires, Lance carefully crafts the art of murder, studying from the “best,” like Ted Bundy, while recognizing their flaws and refuses to let himself fall victim to other serial killers’ mistakes. Readers are able to watch Lance evolve and perfect his murders with an almost painful level of detail.

What I really enjoyed about Highwayman was how Preston truly kept the focus on Lance throughout the novel. At first I was exhausted by how evil he is – I was craving a protagonist to root for against him! But, as I progressed in the novel, I enjoyed how Preston created a strong supporting cast of stars to fight Lance’s evil acts. FBI Agents Lewis Ash and David Maxwell provide the “Law and Order: SVU” vibe, while surprise star Norris Connelly, also known as The Regulator, balances a truly impressive line between hated and sympathetic character.

Highwayman is exceptionally thorough in its descriptions of both murder and crime-solving, and I appreciate the thought and detail that Preston includes. He thoughtfully incorporates professional details both on the villain’s side as well as the protagonists’, which will appeal to serious thriller lovers and SVU addicts. The novel is full of fascinating facts about the inner workings of the FBI and local police and how they prioritize and track criminals, as well as morbid but mesmerizing facts about murder and the psyche of serial killers.

Highwayman succeeds because of its creativity and attention to detail. As someone who has read and watched an almost embarrassing amount of crime novels and film, I have never read something quite like Highwayman. Preston defies stereotypes in his creation of a modern monster, and the addition of 21st century technology and savvy is quite refreshing. Without giving anything away, I can say that the ending left me craving more, so I was pleased to discover that Preston has already released the second and final Highwayman novel.

If you’re looking for a book to thrill you, horrify you and keep you up at night with a mixture of terror and fascination, then Highwayman by M.J. Preston is for you. Highwayman is unlike any novel I have read, and I would highly recommend this novel to any reader seeking both a thrilling and carefully woven story. Preston has succeeded in creating a story that surprises at every turn and authoring a villain that you love to hate.