Maria Miller, author of Dandelion Project, talks with the Monster about the inspiration for her  novel and it’s intriguing character.

Dandelion Project takes place around about the1920’s and on. What made you choose this era for your story and how does this time frame compliment your character?

I had the plot of Dandelion Project in my head long before I wrote it. When I heard a story about the Orphan Train, I was so intrigued that I decided to put it in my novel. My novel needed to end around the 1960’s, so the last Orphan Train, which was in 1929, fit perfectly. Besides the Orphan Train, the timeline of the novel includes the (Dust Bowl) and World War II, which were times of development as well as unrest. The novel is about a young genius whose talent is overlooked because he doesn’t have any formal education.

What was your inspiration for the eponymous project Josef undertakes in the book?

Due to his lack of education, Josef is just a janitor. When a stranger approaches him and offers him an outrageous amount of money to do an experiment, he tells the stranger, “You have the wrong guy.” The stranger has done his homework, though. He knows that Josef is far smarter than most people. The reason for the experiment Josef undertakes is based on my belief that some people will use unorthodox and subtle means to win a war. I believe it’s possible to manipulate some things that can ultimately hurt people.

The majority of the Dandelion Project is narration. Was there any reason for this creative choice or was it something that happened naturally?

The reason for the extensive narration in the novel is because this was my first novel. I’ve always enjoyed writing. When I finally had some free time, I sat down at the computer and began putting the ideas on the screen.

What is the next book you’re working on?

I just finished my seventh novel, which is still untitled. It’s about a man who discovers that he has a four-year-old daughter. Now happily married, this isn’t such good news. Besides that, the little girl’s mother was from India, while Jude is white. Jude fights an uphill battle to bring his daughter into his house since his wife wants nothing to do with her. 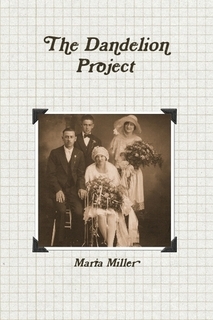