← Virtual Immortality?
Revenge I Will Have →

The Last Mission of the Seventh Cavalry 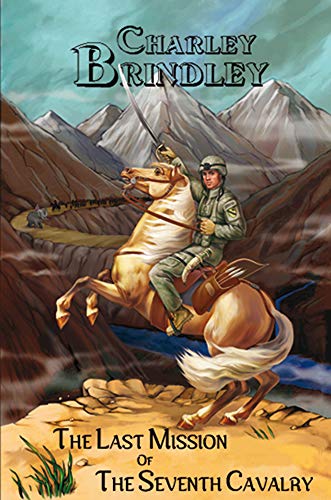 Sergeant James Alexander and his crew have cheated death. Where they landed when they abandoned their plane isn’t nearly as important as the century they landed in. Small things around them begin to add up very quickly as they try desperately to acclimate themselves to their surroundings only to find themselves left with more questions than answers. As they venture out, they begin to meet more and more people with weapons unlike their own who are not in any way fearful of the soldiers. One thing leads to another and Alexander’s crew begins to realize they have fallen into the past with no foreseeable escape.

The Last Mission of the Seventh Cavalry by Charley Brindley tells the tale of a group of soldiers bound for Afghanistan when fate intervenes with a plan none of them could have predicted. Brindley’s cast of characters is unique, and their banter, despite their extreme circumstances, is refreshing and engaging. The dynamic between characters feels true to life, and their exchanges mimic genuine relationships between coworkers.

There is no lack of action in Brindley’s work. From the first chapter, his characters are entrenched in a battle to understand their situation that moves quickly into a battle for their lives. Readers who appreciate well-drawn fight sequences and intricately described battle scenes, will appreciate Brindley’s work.

Cover to cover, the characters’ reactions to their surroundings and the people they encounter serve as a wonderful contrast to the time period in which they have found themselves. Brindley throws in the perfect number of references to modern technology in juxtaposition to the primitive weapons and lack of simple things we take for granted such as calendars and clocks. Consistency is key in books of this genre, and Brindley manages that with ease.

One of the most endearing aspects of Brindley’s cast of characters is the compassion shown by Alexander’s crew during a time of war. Characters one might expect to be brash and full of cold reactions in time of war are actually tenderhearted and loving. Their desire to tend to the injured and not only assist the wounded but provide genuine comfort is captivating. These traits add another layer to the already engaging characters.

History buffs will enjoy Brindley’s work. The author has gone to great lengths to include historically accurate information in his writing. Watching as the inhabitants of the past experience bits and pieces of the future is as fascinating as it is entertaining.

Rarely does one find a truly perfect blend of past and present, but Brindley has given just that to his readers. Memorable characters wrapped in a unique story line make for one fantastic read and lay the groundwork for what I hope are more books with Alexander’s crew.

← Virtual Immortality?
Revenge I Will Have →