← “Listen to this“, the astounding history of quotation marks – Trailer
My Secret to Keep – Trailer → 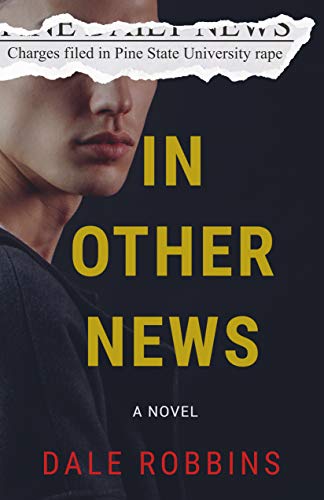 In Other News by Dale Robbins is a sensational fiction story following Marlon Woods, a college student who is the victim of a sexual assault at an off-campus party. The person accused of the crime is Parker Sullivan, the quarterback on the Pine State University football team and son of a former Washington governor. When video of the incident is posted on the internet, some people believe Marlon’s account, while others call him a liar. After being away for the summer, Marlon is back on campus surrounded by whispers and hostility from Parker’s friends. As the trial date approaches, will people believe the truth so that Marlon can receive justice? Or will he be victimized again?

Take a provocative story line and add Dale Robbins compelling writing style and you get a story that is absolutely enthralling. The story is told from Marlon’s point of view, allowing the reader to see everything he sees and experience the raw emotion that he feels as he tries to find a way to live with what happened to him. Although it is a fictional story, it portrays a grim reality. I admired the strength and courage Marlon showed, not only by returning to the university, but also by holding his head up and not allowing the stares and whispers and bullying to stop him from continuing to live his life. I loved the note Marlon wrote to his future self.

The characters in this book, love them or hate them, were exceptionally well developed. I liked Marlon’s friend, Anna. She stood by him when so many others turned their back on him or bullied him. Despite the book’s dark themes of sexual assault, suicide, and bullying, the humorous interactions between Anna and Marlon provided a bit of levity as a counterpoint. Anna’s loyalty to Marlon never wavered, in contrast to Quinn. I felt he could have been a much better friend to Marlon while he was trying to deal with the trauma he’d suffered. I understand why Quinn was upset, but he reacted pretty harshly, and I thought that he could’ve been more sympathetic toward what Marlon was going through and cut him some slack.

Although I enjoyed the book, I found the ending a bit confusing. It was not clear to me what will come next for Marlon, though it was apparent that he had specific plans in mind. Hopefully, all the lingering questions from this story will be answered in the next book, In Other Cases.

In Other News will make you think about the pain others have experienced–and the pain that will continue to claim new victims until there is a massive shift in thinking and much-needed changes to our justice system. In Other News is a thought-provoking novel that is consistently entertaining.

← “Listen to this“, the astounding history of quotation marks – Trailer
My Secret to Keep – Trailer →