← WHERE HAVE ALL THE ROCK STARS GONE?
Traumatic Experiences →

Corrupt Them, or Mentally Cripple Them

Ripped Away follows an engaging cast of characters that discover super powers have a dark side. What was the inspiration for the setup to this intriguing story?

I got my initial inspiration from reading articles in science magazines and websites about real people with unique senses or conditions, such as tetrachromacy (eyes with four types of cones instead of three, that can see a hundred million colors instead of “just’ a million); myostatin-related muscle hypertrophy (well above average muscle mass that imbues super strength); or hyperthymesia (the ability to recall an abnormally large amount of their memory in vivid detail). The fact that there are a handful of people out there who truly see or experience the world differently fascinated me.

Funny enough, it was a couple of Cracked articles that crystallized my main premise, that having abilities might seem great at first, but would have unintended negative impacts that would interfere with even the most basic aspects of daily life. So I decided to take the next step and explore whether these “gifts” would make someone a better person, corrupt them, or mentally cripple them.

Maddy Gibson is an interesting and well developed character. What were some driving ideals behind her character?

Maddy has a big heart, and always sees the best in people, even when they don’t see it in themselves. This naturally led to psychotherapy, but discovering her own uniqueness really connected her to the Sensitives and opened her eyes to their plight. She has a sense of duty to improve her patients’ lives, whether they’re Sensitives or not.

The few therapists I know are very compassionate, and some were abused in their youth, which helped shape their empathy. We haven’t seen much of Maddy’s past yet, but you can bet that she saw plenty of injustice along the way and is doing her part to tip the scales.

I enjoyed the grounded use of powers in this novel. How did you balance the characters abilities in the story?

It would be easy to go over the top and have people flying around, shooting energy bolts, or telekinetically throwing buses around, but it’s been done plenty before. I think it tells a more personal story to see each Sensitive struggling with what she or he can do, for the most part, and trying to avoid any undue attention while trying to stay sane. At the end of the day, they just want to live their lives in as normal a way as possible.

There are certainly some Sensitives whose abilities are more “useful” than others, so I tended to counter that with personality flaws or other obstacles. It’s like having a big sandbox where I get to throw a bunch of stuff at them and see how they react.

This is book two in your Uncommon Senses series. What can readers expect in book three?

There’s a lot of fallout from the climax of Ripped Away, even more so than The Ripper of Blossom Valley. Several of the main characters will be dealing with loss in different ways, for better or worse, while others try to resolve some unfinished business.

And of course, I really enjoy the origin chapters, so expect more flashbacks for some of the Sensitives who have been touched upon but not featured front and center yet. 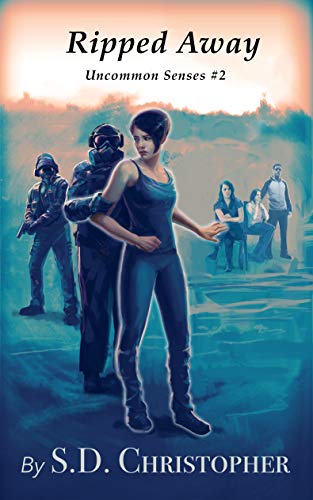 When ordinary people experience unsettling changes, they discover that super powers aren’t all they’re cracked up to be. Enhanced senses come with a downside that make them desperate, or worse, drive them mad.

After an encounter with a serial killer and the untimely death of one of their own, Sensitives led by psychotherapist Dr. Maddy Gibson pick up the pieces of their lives, while trying to recruit more to their cause. Things become more urgent when some of her patients begin to go missing.

Meanwhile, SJPD Sgt. Troy Weathers and his new partner attempt to uncover the truth about the Ripper Murders, while also investigating a kidnapping gone wrong.

← WHERE HAVE ALL THE ROCK STARS GONE?
Traumatic Experiences →