The Covenant of Wickersham Hollow 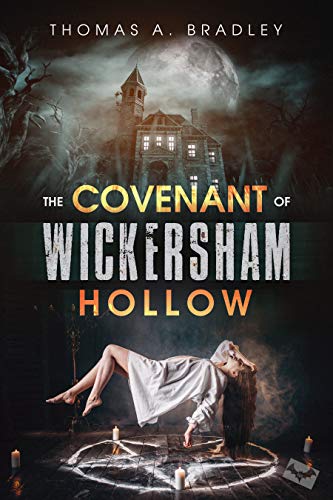 In Wickersham Hollow stands a mansion, once splendid and vast, now rotting to the core. Newlyweds Brian and Annabelle purchased the property hoping to fix it up, but no amount of varnish and paint dissolves stains of the past. Decades ago Annabelle’s grandfather, Henry, along with six close friends, breached the threshold of that same mansion stirring up ghosts that demanded retribution then; and refuse to rest even now. As teens, the old house left them with nothing but nightmares. As adults, an undeniable connection between their thoughts and hearts persists no matter how many walls there are between one another. Living beside the old house all these years, Old Joachim Walcott enlists his right-hand man Ralph Strunk to see to his affairs. Aged but wiry, Walcott knows a lot more about the teens that broke into the Wickersham mansion that night than he’d ever let on. Renovations stall at the old mansion, and the group of friends that had broken in all those years ago are forced into a reluctant reunion in The Covenant of Wickersham Hollow by Thomas A. Bradley.

As the cover art for the book depicts, the 320-year-old mansion that takes up so much real estate within the story is wondrous and haunting. Its very walls appear to shift; very fitting for a house that we learn has a history of dark magic. From the abandoned well used to breach its foundations, to the heavy slamming doors and waterlogged stonework, there are torturous devices and demonic mirages at every corner. Set in the rural idyl of Pennsylvania the story does spend most of the time inside various homes or the sprawling mansion itself. While there are many characters, the story is written well in that we remain within the point of view of each character for fair amounts of time. Learning their backstories and how they connect, let alone their particular turns of phrase and attitudes, becomes part of the fun while the mystery unravels. Tina, Henry, Matt, Janet, Amy, Lucy, and Tommy are who make up the titular covenant. Emma, Brian, Annabel, old Joachim Walcott, and his confidant Ralph Strunk play heavily in this story and the cast thus far does not include ghosts, demons, and other entities at play. This populous cast has a singular plot in mind, however, which keeps the story flowing despite so many perspectives.

Those who enjoy a complex and overlapping storyline that keeps the reader busy from scene to scene between groups of characters will enjoy this novel. While there are quite a few names involved, the characterization really helps keep separation when the action moves from scene to scene. Each chapter takes place in a different location, so while jumping back and forth, tension remains high. Some chapters are further split into present and past. This is done clearly and it is enjoyable to see how the storytelling blends from the present to the past seamlessly with a unique style. Characters are often mid-sentence when their imagination takes over, pulling the reader into their memories. It is a fun tactic Bradly uses to great effect.

Along with the mystery and layered delivery, The Covenant of Wickersham Hollow is rooted deeply in horror. Injury, violence, madness, and possession are woven throughout and crescendo with a moment of profane ravishing coupled with demonic lust. Jargon and misspellings to reflect different dialects are used heavily throughout this novel and it is consistent so it’s easy to gather what the speaker means as it would be face to face. Whether you are a fan of using punctuation and spelling to portray jargon and dialect is purely subjective, but is used well here. While there are one or two points where an omniscient point of view nearly supersedes the character and appears to run contrary to them, there are very few instances of this, so it never takes us out of the story.

In the tradition of Ghost Story and Bag of Bones comes a haunting journey of a group of people bound by secrets forged in youth. Easily five stars for those who enjoy a fantastical ride through a malignant mansion and tainted history of a small village. There are some deviously dark notes heard in the music of The Covenant of Wickersham Hollow.