← Soul Afterlife: Beyond the Near-Death Experience
The Walrus: Monster in the Mist → 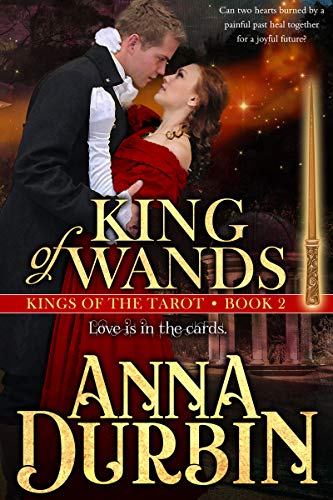 The King of Wands by Anna Durbin is a Regency romance novel set in England, which tells the story of Lady Julia and her town’s new vicar, Charles Rodman. Both have suffered through awful first marriages and have vowed to never marry again. The story follows all the beats fans of romance novels have come to expect, intriguing characters, tense circumstances, and dramatic situations. The story is well-written and flows smoothly  enough to deliver a quick and simple romance story.

The two characters have vastly different outlooks on life. Lady Julia is progressive, open-minded and experimental, being a deft tarot card reader and a fan of India and Eastern theology, whereas Charles is a devout Christian, serving as the town’s vicar and thus, very rigid and singularly focused on his Christian beliefs. This is the main conflict between the two for the first half of the book and it sets up an compelling dynamic between them.

The story itself is straightforward, though I don’t see this as a negative if you’re a fan of romance novels because this does check all the boxes you might look for in one. The novel serves up stirring melodrama that keeps the story moving along quickly in some areas, but then slows to dive deeper into various situations. This allows the reader to just relax and take it in. This made it enjoyable in that it was a great distraction at the end of the day to just sit back and take in a fun story.

Each of the main characters has a sort of “sidekick” character—Charles has his sister Caroline, and Lady Julia has her cousin Arthur—who both either help nudge the characters together or interfere. Both of these characters were fairly amusing on their own. However, I didn’t feel much chemistry existed between the two.

The King of Wands will appeal to avid romance readers who enjoy a cat-and-mouse style relationship and who might be searching for something like an uncomplicated version of Downton Abbey. The book is well written and the author clearly has done a lot of research into the details of the time period, which I thoroughly appreciate as a reader. The King of Wands is an impassioned historical romance novel that is easily entertaining.

← Soul Afterlife: Beyond the Near-Death Experience
The Walrus: Monster in the Mist →