My Therapy and Escape

A Fallen Hero follows Cato as he finds himself stranded, powerless and hunted by Shadow Guards desperate to recapture him. What was the inspiration for the setup to this thrilling series?

This series has been in my head for a long time. Essentially, it’s the culmination of my favorite elements from books, movies, and television shows I consumed when I was young. I would often take existing characters and daydream my own storylines with them, and over time, my unique characters started to take shape, and then the world was rendered around them. I adore books with intricate world-building, found-families of misfit kids, tension that pulls you in and keeps you up all night, hunter-prey relationships, villains with justifiable motives, and antiheroes walking the line between right and wrong, so that’s the kind of story I wanted to tell.

Cato is an intriguing and well-developed character. What were some ideas that guided his character development?

I put a lot of myself into Cato. I started writing this series when I was struggling to figure out my path in life. I’d just been forsaken by someone who had been my mentor, and I was pursuing a college degree in a major I knew wouldn’t suit me for the rest of my life. Writing this series was my therapy and escape; Cato and I were both searching for our places. I didn’t consciously plan this, but I came to realize that his dual powers were a perfect metaphor for the two types of depression that often plagued me during those years of my life—the numb, icy sadness, and the hot, tearful frustration that made me want to scream at the top of my lungs. Pouring myself into this story became a coping mechanism and way of exploring my internal conflicts. I wrote obsessively for several years.

I enjoyed the use of the abilities in this book, as they were well balanced and entertaining. How did you decide on each character’s ability, and how did you balance it to keep it believable?

My characters, in all honesty, took on a life of their own. They developed in tandem with their powers when this story was just a daydream to pass the time at a boring job. I found that the more time I spent with the characters, the more of their traits became apparent, especially in relation to their abilities. Jay’s power is particularly important in terms of symbolism; he has one of the weakest Divinities, and yet, he’s the leader. I wanted him to earn that title through his compassion, guidance, and wisdom, not because he’s the most powerful.

I put a lot of time and consideration into my world-building, and setting limits, even on the supernatural scale, helped to ground the story into the realm of believability. Unlimited power isn’t realistic or entertaining to me; the stakes aren’t as high. Your body shuts down if you overexert yourself, and the same principle applies to supernatural abilities. It makes the characters seem more human, even with inhuman traits.

This is book one in your War of the Realms series. What can readers expect in book two, Phantom’s Mask?

Phantom’s Mask has already been well received by beta readers and editors! The prologue picks up just a few days after A Fallen Hero’s ending. In Book I, most of the core group of characters didn’t have access to their powers, but now, the shackles have come off, and readers can expect a lot more action and fight scenes, complete with plenty of supernatural powers and new ghost-hunting gadgets. There’s deeper character development throughout the story. Azar was a menacing shadow behind the scenes in Book I, but he plays more of a direct role in Book II, and I have to say, he’s such a fun antagonist to write!

The War of the Realms series will be seven books in total, and there will likely be a few standalone novels in the Chronicles of Avilésor that take place in the established fantasy world but don’t revolve around the stories of the Alpha fugitives. The journey is only just beginning. 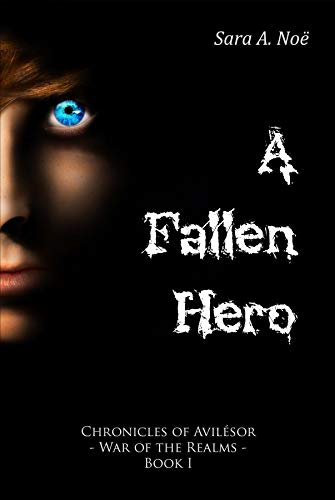 Cato is the only true half-human, half-ghost hybrid in existence. He’s powerful and unique with two divine powers instead of one.

The United States government believes he is the key to developing a devastating weapon that will give humankind an advantage when war inevitably erupts between the Human Realm and Avilésor, the Ghost Realm.

After being an unwilling test subject in Project Alpha for two years, Cato and the rest of his “lab-family” survive a transport accident to find themselves stranded and powerless in the middle of the wilderness. Hunted every step of the way by ghostly Shadow Guards with supernatural abilities and human Agents desperate to recapture their prisoners, the eight young fugitives are drawn to Cato’s hometown where the Rip between Realms connects the worlds.

Cato wants nothing to do with his past, but as his enemies close in, he realizes he’s willing to do anything to protect his lab-family . . .

. . . even kidnap the daughter of a ghost hunter and make a dangerous deal to become a mercenary.