← My Perception of the Afterlife
Claimed by Rafa – Book Trailer → 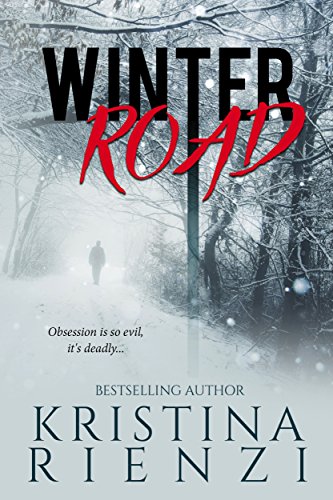 Winter Road by Kristina Rienzi is the story of a domestic violence case gone wrong. Many other great stories come to mind, of burning beds, and tortured wives alongside this entry into a modern tradition of terror. This would be a darkly delightful read on a snowy night alongside the ghostly tales often reserved for the holidays. Following a bad breakup, Amelia Montgomery heads home for Christmas dinner, alone. Her family is unaware she has left her fiancé Jake Grayson, and it seems Jake will not let her go that easily either.

A modern gothic tale in some ways, Kristina Rienzi’s novella contains the isolation and double meanings famed in that literary genre, yet updated by including a family who is present and supports our leading female. That is except for one terrifying man who has murder on his mind.

Jake arrives uninvited after braving slippery roads and seething with revenge. Two problems hit Amelia full-force; her family does not know how dangerous Jake can be, and her former lover, Billy, has stopped by to spread holiday cheer and catch up on old times. If Jake was dangerous before, seeing his fiancé with another man fortifies his rage.

The story takes place in an idyllic Currier and Yves version of a woman travelling home for the holidays. She is the very essence of a loving and warm woman, raised in the fresh air of the countryside and well-rounded after making a career for herself in the city. Jake, is quite the opposite and with more than a glint of the monied and slick psychopath. Two different versions of the north-west from New England calm, to big-city smooth.

There is a sinking feeling through the first few chapters that the alcohol people are imbibing will not smooth the edges here. There seems to be a sinister tool at work here, as we have the distinct feeling that one of these characters may have drank their last.

Amy, Amelia, Mel – all the men in her life, brother, boyfriend and fiancé have different feelings for the leading woman. She is strong and fixed in the reader’s mind as much of the story is told from her point of view, so hearing the others describe her back to us is fascinating. In no version is she weak, yet we see a softer side, the malleable side, the desired side; things that as a main protagonist she could not relay. This is done in very few, well-written words.

While the final chapter rounds out the aftermath and takes the reader full circle, the story is truly found in the bitter cold of night, a gunshot breaking the silence, and a family looking on through terror and pain. This is where the four stars of five are found, and the weakness being in the passages of exposition in a story that otherwise does very well in showing us the monsters from the men. A classic tale of bravery in the face of fear.

← My Perception of the Afterlife
Claimed by Rafa – Book Trailer →