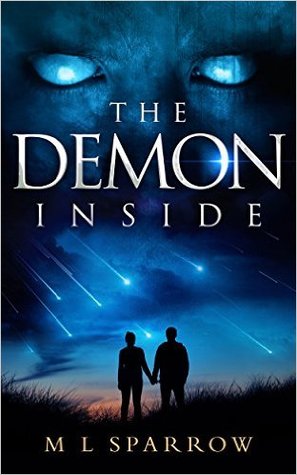 Darcy is an average teenager; worrying about grades, college, and friends. She stumbles across the love of her life and is happier than she’s ever been. Too bad the world is ending. Mysterious meteors falling from the sky bring death and destruction to the world leaving behind bodies that rise from the dead, with glowing eyes and an insatiable hunger. With the help of her new love, Alec, Darcy is able to save her sister and her best friend. But after the dust settles the hard part begins; living in this new post apocalyptic world.

The Demon Inside begins as many other young adult novels and I was worried that I was in for another coming of age teenage angst type novel. But instead I was pleasantly surprised to find the novel takes a turn early on towards a more post apocalyptic horror story which blends nicely with the aforementioned genre. Darcy is worried about grades, family, friends, and love, and in the first couple of well written chapters those things build a connection between the characters. In the middle of the novel is where Darcy’s friendships and love are really put to the test as the world she knew is destroyed. Meteors fall from the sky and people turn into creatures that feed on other people. Darcy loses her family and she has to go on the run. The group make a new life in a community of people that prefer isolation over friendship. Most of the novel is about the connections that Darcy makes with the people in the community they begin to build. I think that the destruction of the world, and the resulting creatures, was something that drove the characters together, but wasn’t something that moved the story along. The Demon Inside is a character driven story that deftly builds complex connections between people and their motives. All of this great character building leads to a truly heart breaking ending where I was literally left with my mouth open as I read the last few sentences of the book.

I felt that 25% of the story could easily be cut out by a good editor. Removing a lot of over explanations of character movements and overly detailed descriptions. I loved the world building that was going on. I just wish more was left to my own imagination. The Demon Inside is a great read and would be perfect for anyone looking for a young adult novel that is set in a post apocalyptic world.