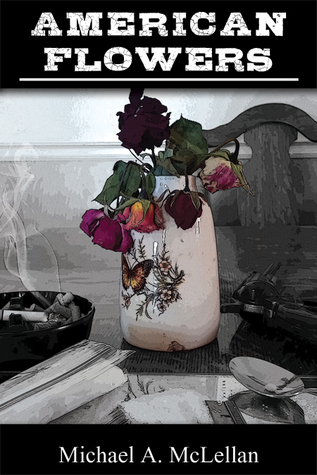 This novel follows Chris, a drug addicted young man who is trying to find his way. After meeting Allie, a young lady who has her own set of problems, and getting her started on the needle herself, things go south quickly. He quickly finds himself on the wanted list of the police, his supplier, and Allie’s relatives. The plot quickens and keeps the reader entertained as Chris struggles to come to terms with his past and find a way out of the mess he has created.

The novel has a dedication to Stephen King at the beginning, which influenced my reading of the rest of the text. The descriptions of the characters and the gritty diction is King-esque. The author creates a believable world with characters that act just like one might expect when under the influence. While the world and characters are believable and relatable, they do fall flat in a couple of areas.

First, Allie and her naiveté lead to some questionable choices on her part. As an example, she chooses to trust and follow Chris on his downward spiral even though she had known him for less than a week and had never done anything more than marijuana before the events of the novel. The author provides her background, which some would indicate as an influence on her choices, but it is still too much self-destruction for this reader to find believable.

Second, the plot is just a little too predictable, and a little too gritty for my taste. Chris’ choices are too simplistic in the first third of the book, leaving the reader to easily decipher how those choices are going to play a role later in the story. This is especially true of Jesse James, a character who only appears for a couple of pages before the plot moves itself forward. The middle of the book gets violent and shows just how far Chris had fallen since the events of his past had derailed his life. This reader won’t post any spoilers, but Chris’ choices are extreme and the text is not for the faint of heart.

The final third, though, is fantastic. To see how the author deals with his characters and their pasts is just beautiful. I won’t say anything more, no spoilers!

Overall, the novel is more than entertaining. Once the reader sees the mess that Chris created for himself and starts to see how his past is affecting his current situation, it makes for a thrilling, heart-wrenching read. Watching Chris and Allie try to battle their pasts while dealing with an ever more dangerous present causes the pages to turn faster and faster through all of the poor choices and self destruction to the conclusion. Personally, it was heartbreaking to watch Chris and Allie cling to each other as they attempted to find a way out of all of the wrong choices they had both made. Any reader who gives this story the time will not be disappointed.