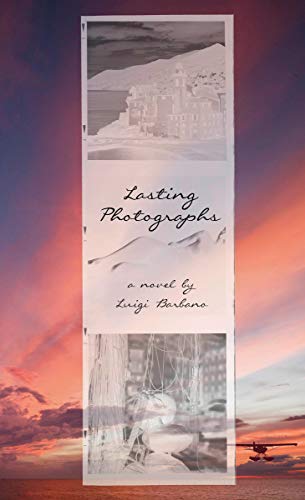 John Ragnar has found himself on the cusp of a discovery that will lead him in a direction he never anticipated. When he comes across a box of photographs, he sets out to identify not only the owner of the photographs, but he wants to put names with the faces in them. One woman in particular catches his eye, and he makes it his mission to identify her as he embarks upon a journey which takes him across the globe in search of someone who might be able to tell him more about this woman who otherwise remains an enigma.

Lasting Photographs, by Luigi Barbano, details the adventure upon which one man sets in order to find the owners of photographs he discovers in a box on the beach. His mission takes him to Italy, and by his side is the woman he has only known for two days and met by pure chance but with whom he has instantly fallen in love.

For as engaging as the plot of Barbano’s story is, the text seems to lack something in the way of relationships. I feel there is a good bit of narrative for a story that could easily have been rich with dialogue between the two main characters, John and Katia. As a reader, I enjoy immersing myself in the conversations of the characters and count on dialogue to contribute to the rising action. Barbano’s descriptions of John’s plight and the lengths to which he goes to retrieve information about the woman pictured in the mysterious photographs are more than adequate for developing the plot. However, I can’t quite get past the fact that more dialogue could have enhanced the entire story line.

In addition to the lack of dialogue, Barbano’s work feels a bit cut and dry for its genre. This blend of realistic and historical fiction consists of, in many cases, brief and straightforward paragraphs. Readers will not find the flowery language they might expect to find describing the scenes in Italy. Readers more interested in mysteries will appreciate the point-blank way in which Barbano addresses the dilemmas at hand and jumps right into the pursuit of the photographs’ origins.

Barbano goes to great lengths to include technical aspects in his writing. As a photographer himself, he does a phenomenal job of incorporating the most finite details of photography into his story. The author is also adept at weaving the complicated language of the mechanics of flight into his plot. Readers who appreciate text more focused on technical language will find this book a delight.

While I enjoyed the overall story line in which John and Katia make it their sole mission to recover the meaning behind the lost photos, it is my preference to read fiction in which characters’ interactions take precedence over narrative. Lasting Photographs is a short read and one where readers with an avid interest in photography will find to be a worthwhile pick.