← It Just Kind of Happened
Roots in Gothic Fiction → 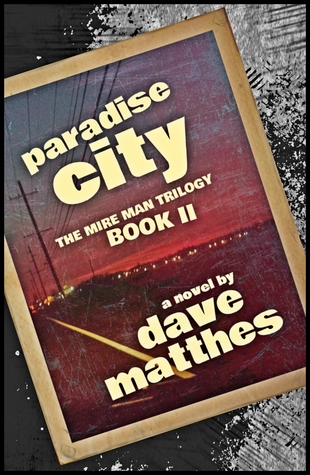 Paradise City by Dave Matthes is the second book in his Mire Man Trilogy. The story goes back twenty years to Arlo Smith’s teens, a time of many firsts for him. The story opens with Arlo and his best friend, James Landon, skulking through the woods in order to peep into a local stripper’s window, trying to see what any puberty-addled boy hopes to see. What they see and experience there is a first that changes them, their friendship and perhaps, their lives.

High school isn’t fun for everyone. Arlo and James’ freshman year pulls them apart, and while they remain friends, they meet new people, experience first love, infatuation, and learn the pleasure and pain of drinking and smoking weed. Arlo’s mother introduces him to a parade of boyfriends who drag him into a world of alcoholism, and abuse. Through it all, Arlo learns that he can write, his teachers think he’s good at it, but it isn’t enough to keep him from the lure of drinking and brawling.

If you’re going into this book expecting an uplifting coming-of-age story, you will be sadly disappointed. Paradise City is a dark, no-bull look into the brutal world that Arlo grew up in. His mother’s boyfriend uses him as a punching bag, his best buddy is a drug dealer, and he has nowhere to turn to except for the booze he steals from home or gets at parties every chance he gets.

Interludes from Arlo’s adult life are interspersed within the novel. He’s getting treatment at the Moriarty Institute, where he admitted himself for psychiatric care. This adds insight and ties Arlo’s past and present together. Whatever confession his doctor hopes to get out of him might be something from his past, or it could just be the ramblings of a man with mental illness.

The author really nails the emotions and reasoning of a teenaged boy. Arlo’s thoughts and decisions are spot-on for a teen. No one but his guidance counselor seems to care one way or another about his future. The counselor has good intentions and Arlo is infatuated with her; she speaks to him like he’s an adult, but she’s not that much older than he is. Their relationship skirts the line between propriety and danger more than once.

One of the problems I had with the book was placing it in a time period. I’m not sure if it’s inconsistency, or if it’s intentional. Music has a role in the story, and all of the songs and bands mentioned are from the late 1970’s. In one scene, there’s a reference to a flat-screen monitor for a computer playing music, but later, in the same office, the music is playing on a record player. The students at the school don’t mention cell phones or social media, yet Arlo has a cell phone. The pop culture references are from late twentieth century, yet the few mentions of technology feel like the twenty-first.

Though it’s second in a series, Paradise City holds up on its own. While you don’t need to have read the first book, if you start with this one, you’ll certainly want to go back to book one and catch up before the final installment of the trilogy.

← It Just Kind of Happened
Roots in Gothic Fiction →