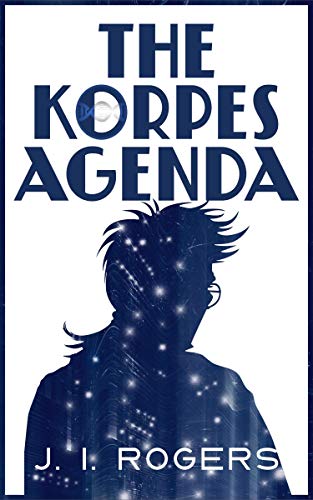 Nash Korpes has seen easier days. He’s overworked, in a constant state of recovery from one incident or another, and those he wants desperately to be able to trust just might be the real enemies. As a Master Tech, Nash poses a certain amount of danger. The true question is: Is he a danger to those he seeks to destroy or a danger to himself. Something is hanging over Nash like a black cloud, and the “friends” he has made can’t seem to pinpoint his problem. Like a loose cannon, Nash goes about his job always leery of his companions.

Rogers’s second in a series, The Korpes Agenda shows the vulnerable side of the main character, Nash Korpes. From the first two chapters, readers are given a clear picture of a man who is broken emotionally and in a constant state of high-alert–always second guessing those around him. A man who is outwardly gruff and speaks his mind, Nash is quite emotionally crippled, sheltering himself by keeping his true feelings hidden deep within. Rogers’s main character is pleasantly complicated and one who is indeed worth following from book to book.

The setting of Rogers’s series is unique, and there is something about the ways in which the author chooses to describe the setting that appeals to me. Set nearly 500 years in the future, one would think the terminology would be difficult to discern and the overall setting unrelatable. Rogers, however, does not disappoint and somehow remedies this and succeeds in providing readers with a surprisingly relatable backdrop for her characters.

Unlike many books of this genre, The Korpes Agenda focuses as much on the characters’ weaknesses and personal struggles as it does the technical aspects of their world. I appreciated this aspect very much as I am a reader who becomes invested in characters no matter the setting.

Nash Korpes is a true study in character development. Without giving too much away, I will say that the self-talk that happens with Nash is highly engaging. I was caught up in his moments of self-doubt from the first chapter of the book. He is a man who is being taken over by his own thoughts, but the way in which Rogers has chosen to show this is truly something to behold. I found myself revisiting sections of text in awe over the method the author chose to use to show Nash’s inner battle.

This being the second in a series, the author does an amazing job summarizing each character and pulling in quick but thorough elements from the first book in order to bring readers up to speed.

Science fiction fans will appreciate the technical aspects of Rogers’s work, and readers who seek a main character who provides the opportunity for psychological study will immediately be drawn to Nash Korpes.