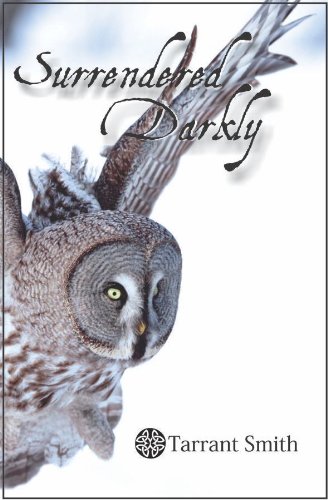 Cora, not part of the upper crust of society, is considered a low ranking fey. A handmaiden with an iron-clad memory, Cora has not forgotten Neb and the hurt he caused her in the past. Neb is as unseelie as he is unsavory in Cora’s mind, but he has other plans for the two of them–plans over which he has no control. While a romance is the furthest thing from Cora’s mind, she has no way of knowing that Neb will be the one to make plans for so very much more than a fleeting romance. Neb is about to change the course for both their lives no matter what it may take.

Tarrant Smith has added yet another colorful book to her Darkly series. Surrendered Darkly follows Cora and Neb on their journey back to one another and along a tumultuous and unlikely courtship. Cora is a strong-willed fey with a mind of her own, and Neb is determined to figure out why he feels so drawn to Cora, a woman he is convinced he should remember.

Blue, a mother figure to Cora and a goddess in her own right, is a truly interesting character. She has many layers Smith reveals throughout the book. Perhaps Blue’s most striking characteristic is her tendency to mother over Cora. As with all of Smith’s characters, I am always amazed and somewhat taken aback by their appearances in human forms. Sometimes I feel as if I am reading two different books.

Smith shows readers a little more of the reactions given by mortals. When Neb finds himself in town, readers are able to witness along with Neb the reactions of the humans around them when Neb isn’t quite in his full human form. It’s refreshing to see that the mortals around the seelie and unseelie are not totally oblivious to them. I find that adds a nice layer of believability to the fantasy being woven by Smith.

Of the Darkly books, I find this one to be the most steeped in romance though it lacks the frequent love scenes. The basis of this installment is the relationship, or lack thereof, between Neb and Cora. The entire plot centers around deep feelings taking over Neb and how he will deal with them. Cora, on the other hand, has a battle to wage within herself as she faces Neb a second time following her previous heartache. Readers who are fond of deep-seated romances will enjoy this fourth book in the series.

I am always intrigued by Smith’s abilities to write characters who are tied together emotionally and by their abilities.

From the first page, this romantic fantasy engages readers with the lives of colorful characters and explores realms via two headstrong main characters, Neb and Cora. Theirs is a story fans of romance won’t want to miss.