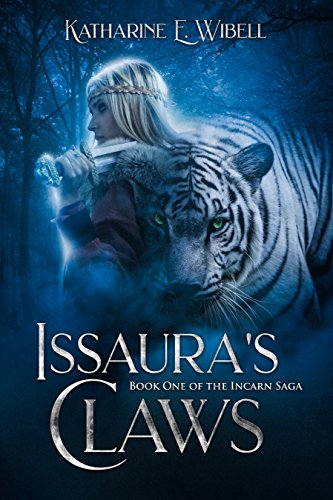 Issaura’s Claws, written by Katharine Wibell is the first book in the three book Incarn series. The story is set in the kingdom of Elysia, an island inhabited by two races: humans and theriomorphs. The novel focuses on themes of racial divides, trust, friendship and gender stereotyping. Interwoven are legends and traditions, gods, and mythical creatures. All are called to work together when the kingdom comes under threat.

The setting for Issaura’s Claws is the kingdom of Elysia. Although outwardly appearing united, socially, the kingdom is divided invisibly into two groups: humans and theriomorphs. This divide becomes evident to the reader in the opening lines of Chapter One; “Trouble.  In the schoolyard, Lluava spotted a group of boys near a large oak. Definitely humans”. The reader feels Lluava’s pain as she describes these bullies and how they attack an innocent lamb. We then see her surprise and disappointment as she realizes that even her teacher sees theriomorphs as inferior. The author cleverly contrasts the beautiful setting with the social turmoil that exists in the kingdom. It is a clever way to address themes of stereotyping and racial divides.

Lluava is the main character in this story. She is a seventeen year old theriomorph, (a race that appears human but has the ability to change into animal form) and it is evident from the beginning she is headstrong and determined. Unlike her mother and many other theriomorph’s she values the old traditions and has not succumbed to all things human like many others. When an army needs to be raised she volunteers without hesitation. She begins to break down gender stereo types when she is placed in the women’s camp to learn to nurse the sick. She demands to be trained in combat, and is eventually permitted to train at the men’s camp. It is there that she soon proves she is a force to be reckoned with.

Issaura’s Claws is an entertaining fantasy novel. Descriptions of the setting and characters are detailed and rich. The themes of the story parallel with dilemmas that society faces today. I look forward to reading the second book in this fantastic series.