← My Kill Play
The Conflict of Desires →

From Miracle to Murder: Justice for Adam 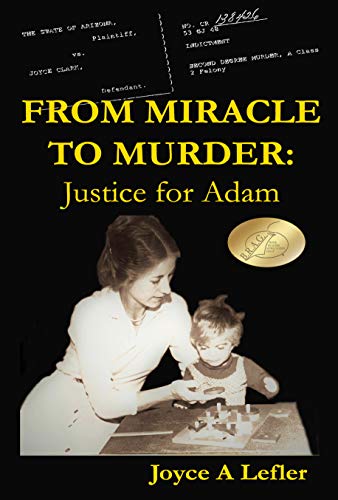 In May of 1977, Joyce gave birth to her second child, a son named Adam. Adam was a beam of light in an otherwise dark world surrounding Joyce and her daughter, Anne. Joyce was faced with the daunting task of raising a child with Cornelia de Lange Syndrome–a child she was told would never thrive and would require intense specialized care the rest of his short life. Joyce, a woman already trapped in an intensely abusive marriage, vowed to raise her son and his older sister together for as long as he may survive. In May of 1977, Joyce began a journey of new love with her two small children. In September of 1983, she was accused of Adam’s murder.

From Miracle to Murder: Justice for Adam is the true story of Joyce A. Lefler’s harrowing experience as a battered wife and a mother accused of murdering her young so told in her own words. From the first pages of Lefler’s story, it is painfully clear that Joyce is a fighter. The abuse she endured at the hands of her husband was nothing short of horrific. The author describes in vivid detail the moments of hair-pulling, his verbally abusive tirades, and the incidents of rape she endured as her children slept. Her husband, Allen, was a monster by all rights and possessed no redeeming qualities whatsoever. Several times while reading, I gasped audibly at the terrorizing scenes described by the author.

When accused of murdering her young son, Adam, Joyce faced obstacles at literally every turn. I cannot imagine losing one of my children and having the other ripped from my arms and turned against me. Joyce is a special person indeed. She is a survivor in every sense of the word.

The circumstances surrounding Adam’s death and the light shed on the many mistakes made during his murder investigation are overwhelming. She describes the most infuriating neglect on the part of the police department. All of these oversights led to one heartbreak in Joyce’s life after another. From having her husband awarded custody of her daughter to having trusted friends run the other way after her own arraignment, Joyce watched her life fall out from beneath her, but she somehow held her own.

It’s difficult to say this is a great book because it’s a tragic true story. I will say this–if your life has in any way been touched by abuse, this is a book you should read. By the same token, if you are the parent of a child with special needs, Joyce’s life story is one with which you should familiarize yourself. So much can be learned from her experience with her son and some of the medical professionals Joyce encountered in Adam’s first days. From her childhood to her marriage with her first husband to her painful existence looking back in fear of being accused again of her son’s death, Joyce describes for readers an incredibly difficult life of choices no one should have to make but everyone should read.

← My Kill Play
The Conflict of Desires →