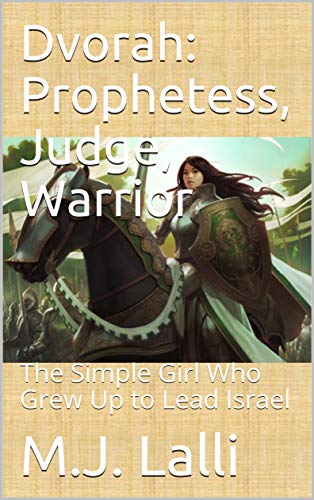 Dvorah is the only child of Eleazar and Ajalon, and as such she is trained in many different skills to help her parents. Her childhood in Israel is simple, but happy, surrounded by family and friends. One day, late in her teens, her entire life changes when she receives a message from God telling her to sit in judgement of the disagreements between others. She does this to great acclaim for three years before being given an even bigger task- to lead an army of thousands in war, alongside her cousin, Barak. The battle will change their lives and shape their future together.

In Dvorah: Prophetess, Judge, Warrior, M.J. Lalli tells of Dvorah’s life and lessons on her way to becoming the jewel of Israel. The book begins slowly, detailing Dvorah’s daily life with her playmates, time in training inside the wool tent, and time spent learning to make perfect bricks. Through it all, Dvorah’s persistence, precision, and level headedness are consistently referenced as some of her most remarkable traits. In the meantime, Lalli paints a vivid picture of Biblical-era Israel and infuses the text with many stories from the Bible, but never seems overtly religious. Many of the stories are told in the context of Dvorah’s challenges and belief. Other characters don’t feature very prominently, with many of them coming in and out of the narrative just a time or two, and some others appearing only once. Dvorah and her horse Zenja are the most constant players in the tale.

Faith, and remaining true to how you have been taught, stand as the primary themes of the book. Throughout the course of the novel, Dvorah never strays from the faith and religion she was raised on, and in due course is rewarded for her diligence. As a contrast, her childhood friend Simona is used to illustrate the dangers of straying from the path of their religion, suffering all manner of tragedies along with her sins.

Dvorah herself is a well written and well-rounded character that succeeds at her tasks, but never in a way that feels convenient or out of place within the narrative. She works hard for what she achieves. The book is also well written in that it has a religious foundation but doesn’t once feel preachy in the way it’s presented. However, the slow start makes it difficult to get into the story, and the parables, while relevant, are often long winded. The second half of the book does pick up the pace dramatically as Dvorah fulfills the second of her heavenly callings. Dvorah: Prophetess, Judge, Warrior is a thought provoking novel that many will enjoy reading.