← The Emotional Truth
With a Celtic Twist → 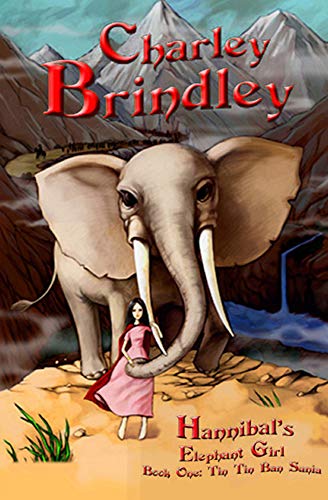 Charley Brindley’s Hannibal’s Elephant Girl takes place in 229 BCE in North Africa. We’re treated to a thoughtful account of life in a river camp near Carthage. The delivery of the story is exceptional as the reader can effortlessly follow the various story lines in the book. There are more than one major character but the main focus is on a girl called Liada. We accompany this 12-year-old girl as she goes about her business and the adventures in the camp. The narration is simple but still managed to keep my attention. Different literary and stylistic devices are used to spice up the plot and every character is developed uniquely. The reader falls in love with some characters and loathes some due to how the author represents them. This connection brought me the most joy because the characters I was rooting for almost always won.

Liada gets rescued from a river by an elephant named Obolus. The savior elephant is among the many that are being trained for war at the camp. There is a war looming and every party needs to prepare for any situation. Despite getting rescued, Liada’s life is not all smooth as her memory seems to have faded. Liada is assigned some tasks, among them feeding soldiers in the camp. Yzebel, the woman who took Liada runs a cafeteria where soldiers go to eat.  Yzebel is patient and understanding. She is one of the characters the I greatly enjoyed from the beginning. Yzebel, however, has a disgraceful son, but despite this, Liada continues to be the hardworking girl who keeps it together.

I appreciated  Liada’s character as she is accountable for anything she does and treats everyone with courtesy. Liada’s daily tasks make her interact with different people in the camp. I appreciate how the author describes events in the book. Everything is detailed. The camp, soldiers, city of Carthage and the activities the characters engage in are well illustrated and one can easily visualize the happenings. Hannibal is one of the members Liada interacts with. Hannibal is in charge of the elephant army. Tin Tin Ban Sunia is another character that Liada befriended. Liada and Tin Tin Ban Sunia became friends despite the latter being mute.

The kind Liada and Yzebel, however, plan to save the poor girl from slavery. This was a bold but risky move as the two put themselves in danger. Their arrangement also revealed another side of the characters that I got to love. Charley Brindley makes a simple story more exciting with twists in the plot. The suspense and action the characters take make the reading thrilling. Hannibal’s Elephant Girl is engaging, with a balance of detail that allows your imagination to run. The characters are well developed and addictive to follow. This is a fantastic book with plenty of lessons for young readers.

← The Emotional Truth
With a Celtic Twist →