← Masks
Beneath the Silent Heavens: A Fantasy → 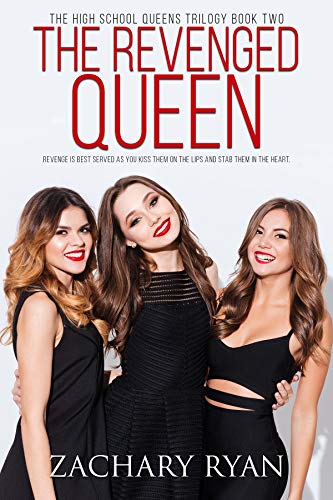 The Revenged Queen by Zachary Ryan takes place after prom, where Danielle, ‘The Marked Queen’, decides to expose every little dark secret of her classmates. A group of teens is set up against one another struggling with sexuality, friendship, and trust. Now, everybody wants to know the real Marked Queens. While living out their senior year of high school, scandals and lies are revealed by separated friendships. Afraid that they are next on the line, everyone fears their secret being found out. Is it a matter of time before someone gets their rightful revenge?

I love when authors don’t stick to just one perspective, switching around points of view in the story. Having one perspective easily gets boring. With different perspectives, readers can get a deeper understanding of the interactions between characters and see events from a different point of view. This makes for a well-developed story that doesn’t feel like one voice the entire story.

One of my favorite aspects of Ryan’s work is how he writes the character’s inner thoughts, mostly at the end of each chapter. Written in the third person point of view, the narrator crawls into the minds of the characters, digging out information in a consistently creative way.

One of my favorite endings to a chapter was in chapter three, “Delilah, we thought your only talent was being on your knees and whining too much. Are you about to trade in that kitchen knife for a razor blade?…” Ryan used a strong voice, evoking an unsettling tone that someone else is watching these high schoolers.

There were some moments in the story that were tough to read, especially Calvin’s story line. But I appreciated the opportunity to write about topics such as sexuality and ruthless behavior. High school is all about finding out about who you are. We’re all going to have high school drama. Ryan invests closely in each member’s stories either making readers feel empathetic or despise one of the characters.

This is book two in a series and I suggest reading book one first, High School Queens, as it will get you acquainted with the characters.

The Revenged Queen reminds me of my own stories of high school drama and I appreciated the attention to detail. The interactions between the lives of these three high schoolers kept me on-edge flipping through the pages to see what happens next. Absolutely riveting.

← Masks
Beneath the Silent Heavens: A Fantasy →