← A Dark Ending in Mind
The Mermaid’s Grandson – Trailer → What I like most about Harvest is the ability to throw around technical terms but still keep things grounded and understandable. How did you find that balance in your story?

I love books that not only captivate me with their narrative and make me fall for their characters, but also those from which I walk away feeling that I have learned something new. Science, especially science discussed in this book, is difficult. Most people don’t advance too far in their science education. Not because they don’t want to, but because the incentives in life tend not to align with getting PhDs in physics and astrophysics and chemistry and anthropology… That doesn’t mean that most readers are not interested in those topics. I believe just the opposite is true—readers of science fiction read this genre because they love all the science. So when I find some fascinating bit of research that I get excited about, I want to share my excitement with my readers. I embed enough real science (might as learn something that is true, right?) into my stories, that people hopefully walk away learning something new in a painless and entertaining way. That’s the goal, anyway. To do that, I can’t simply write an info dump, I have to make sure that each thing I ask my readers to learn is motivated by the story. Humans learn by telling each other stories. Science could be taught this way too.

“Harvest” is the story of first contact. So by its nature, it has a lot of chemistry and physics and astrophysics nuggets in it. But I wanted to expand the story so that the reader is given tools to think about evolution in general. What would life be like on some other planet? How can we use what we know about our own human evolution to make educated guesses about alien one? We can use logic and deduction to make educated leaps into the unknown. I think the best of science fiction does this. And those are the books I love most. So I write what I love to read. That’s the balance.

I enjoyed the well drawn characters in your novel. Who was your favorite character to write for?

This is always such a difficult question—I’m the author, I gave birth to these people. How could I choose a favorite? But I do have one: Alice. Alice is so smart, both emotionally and intellectually. She has an ancestry of an African Pygmy. She will always be an outsider, even as the society described in my book works hard not to notice her being different. It would be impolite, right? So this perspective of perpetual outsider gives Alice a unique point of view that changes the course of human history…evolution. Being different gives her power. That is something I try to incorporate in all of my stories. We are all different, all unique. We all have weakness, but we also all have powers. I write hard science fiction, but my characters are people who tend to be rejected by their society—crippled, orphaned, cognitively different, emotionally damaged, homeless, broken in some way or another. I want my readers to feel empathy for individuals that are very different from them or to recognize themselves in my characters.

What readers reactions to your story have surprised you the most?

The most surprising reactions to “Harvest” had to do with its being illustrated. Most modern adult books don’t have illustrations. But I grew up with books that did. I fell in love with Captain Blood not only from the narrative of the story but also from his pen & ink portrait in the book! I love the additional dimension images add to a story. Not every illustration is as I imagine it in my mind’s eye, of course, but each is always a thrill. So I wanted to give my readers the same experience that made/makes me happy while reading books. Quite a few of my adult novels are illustrated. I feel like those who don’t like them are free to disregard them, and for those who like that kind of thing you’re welcome! 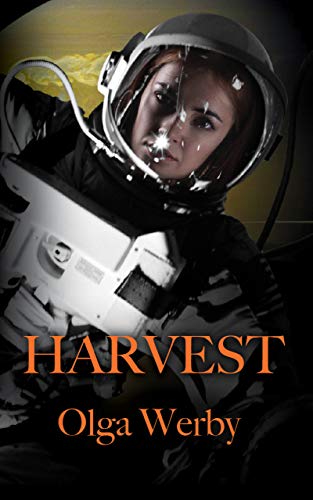 Almost a century after Keres Triplets asteroid impact and subsequent nuclear exchange almost ended all human life on Earth, a strange artifact is discovered on one of the moons of Saturn. Who should be sent to the outer reaches of the solar system to initiate the first contact with an alien culture? Dr. Varsaad Volhard, an evolutionary-socio-historian, is chosen to help the world understand the alien civilization that left an artifact some thirty thousand years ago, before humans even learned to farm, at the time when other human species still walked the earth. While Vars prepares for the mission, her father, Dr. Matteo Volhard, discovers nanobots among the microplastics he studies. The bots are everywhere and seem to have been created to bond with human cyber implants. Why? Matteo is made to keep his discovery a secret…as well as his and his daughter’s true origins. Both were donated to a Human DNA Vault as babies. Matteo was raised as a Seed before leaving with his young daughter to study ecology around the world. Who knows what? Who is in control? How does one communicate with non-human intelligence? People seem to die in gruesome ways as their cyberhumatics go haywire on Earth and on Luna and Mars colonies. Is Earth under attack or is it all just a cosmic misunderstanding? Vars needs to use all she knows to solve the mystery of the ancient civilization on Mimas, as her dad battles the alien nanobots at home.

← A Dark Ending in Mind
The Mermaid’s Grandson – Trailer →