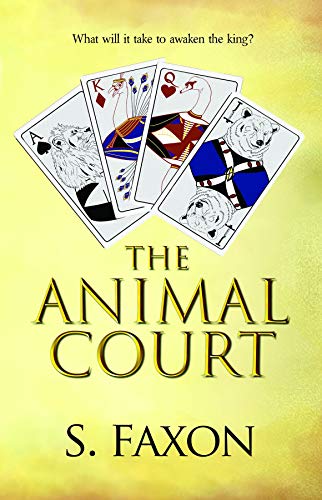 The Animal Court by S. Faxon is a fantasy romance novel following the political journey of Gertrude K, a noble politician in King Heron´s court. In a very divided country where the upper class thrives and the lower class starves, Gertrude is a prepared politician and close advisor to the king. When people from the lower classes start to get restless, Gertrude has to find a way to get through to her monarch, who’s blinded by luxury and vanity. Unfortunately for Gertrude, the arrival of the king´s brothers only add fuel to the flame, old feuds arise and rivalries emerge as the siblings disagree on most political issues and one brother desperately wants the crown. To make matters worse, the king is surrounded by greedy advisors, all who wish to maintain their luxurious lives at the cost of the people’s wellbeing. Will Gertrude be able to save the country she loves or will it succumb to the menacing games of the animal court?

The Animal Court is incredibly hard to put down. It will transport you to a country threatened by civil unrest, the tension is high and the stakes are even higher and it’s all delivered with eloquent descriptions of a more classic period in time. And though it is placed in a fictional country, the story closely resembles the political situation and dynamics of several real-world countries. The destitute lower class and the avaricious upper class reminds me of the French Revolution. The most impressive aspect of this novel is the authenticity of the characters. They are all incredibly well-developed, with motivations that are sometimes complicated but always understandable, which is important in a book about the human drama in a kings court. The main character Gertrude is particularly admirable. She’s a female leader in a male dominated world. She has fought for her right to study, work, and ultimately become a high-ranked advisor within the king’s court. She is strong and stubborn, the result of having to fight twice as hard to get her views heard. The author does a great job of balancing the book’s political nature with romance and drama, as it involves various romantic affairs making it a perfect mix for fans of both genres.

I enjoyed the authors references to the old Japanese fable and the smooth storytelling that will leave any reader intrigued until the very end. The Animal Court will appeal to fans of political thrillers or dramatic romance.