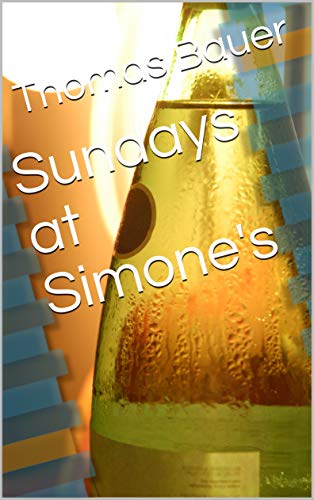 Sundays at Simone’s by Thomas Bauer is set in Los Angeles and the surrounding areas about a young man named Michael McDowell. As a young boy, his parents were killed in a car accident and he was adopted by his Aunt Madeleine. His aunt’s best friend was Sheila, an unsophisticated woman who was often down on her luck. Years later, Sheila has transformed herself into Simone, a wealthy and glamorous woman who married well. Every Sunday, Simone hosts exclusive gatherings modeled after 19th century salons, where the elite would come to enjoy art and music and discuss the issues of the day. Michael is barely making a living as a piano player at an Italian restaurant. What will happen after he is invited to Sundays at Simone’s?

Author Thomas Bauer provides readers with a refreshing character driven story that is easily enjoyable. I especially liked reading the sections of the story where Michael worked in the music department for the movie studio. It was interesting to get a glimpse into that behind the scenes aspect of making a film. I also liked learning how all the characters’ lives turned out, some succeeding and others suffering failures. The ending of the book had some unexpected elements.

The novel blends contemporary urban fantasy with sultry drama where we find an adulterous affair between Simone and Michael. She was married and he had a girlfriend that he claimed to love, but that did not ring true given his actions. I enjoyed the second half of the novel a lot more than the first half, which I think is attributed to being introduced to characters in the beginning, some of them not being likable, and afterwards seeing them evolve was much more interesting. They were all people who seemed to only care about their own interests and used others to get ahead without a thought for how their actions affected anyone else.

The story is told from the first person point of view of Michael, which gives readers a inside look at his motivations and ruminations, which provides more context for his actions, but it’s still left up to the reader to decide what was right and wrong. I was able to empathize with the characters and was emotionally involved in this riveting story.

Sundays at Simone’s is an emotional dramatic fiction story following the lives of stirring characters as they make decisions that change their life and affect the lives of others. I highly recommend this book to anyone who enjoys reading light but intriguing romance novels.