Spies of the Deep 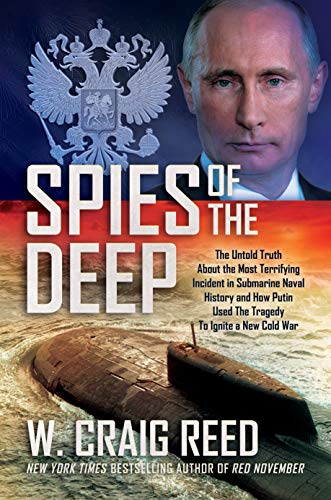 Spies of the Deep is riveting and timely because it has so much to do with today’s political climate and current tensions with Russia. When Valdimir Putin came to power a torpedo sends a Russian submarine to the bottom of the Barents sea. All of this occurs a decade after the cold war. Twenty three people survived but were not rescued and ended up dying after the incident. The Russians refused to get aid from the west. Evidence of collusion with a spy submarine from the United States revealed by Russian naval officers eventually lead to them being fired. This all leads to rising tensions between adversarial governments.

W. Craig Reed reveals a little known naval incident and unveils it with an impressive understanding of the events. There are different facts and opinions that the author bring into light, but the manner with which the information unfolds made me feel like I was listening to a true crime story podcast. The story is told with a sense of intrigue that permeates the entire book. I had to double check to ensure this was indeed a nonfiction book. The story itself is absolutely captivating, but the way in which author W. Craig Reed presents the information makes it feel like we are reading an international espionage novel by Tom Clancy. While international relations between superpowers that don’t trust each other can be complicated, W. Craig Reed ensures that everything is easy to understand and fairly straight forward.

I found the Russians deeply interesting in this book and I appreciated the depth of the authors knowledge on the subject and found myself feeling better educated, not only on this subject, but about Russian and international politics as well. I also found myself terrified by the superiority of Russian and Chinese torpedo technology. While I heartily enjoyed reading this book, and felt that it was well researched overall, I felt that sometimes the book dipped into conspiracy theory territory that, while fascinating, pulled me out of the deep trench of reality the author places readers in.

Spies of the Deep is an enthralling military history book detailing a grim event in naval military history that changed the world. The skill with which the story is told will appeal to any fan of political thrillers or anyone seeking to expand their knowledge on history and politics.