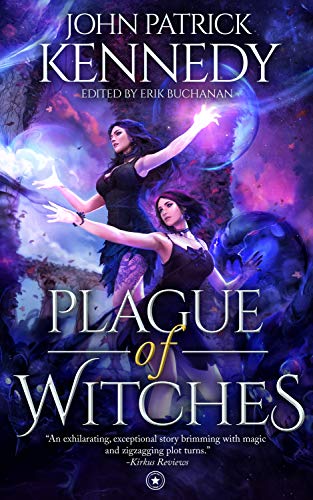 John Patrick Kennedy’s Plague of Witches is a coming of age tale about 21-year-old protagonist, Kana. Kana has been raised by her wealthy father in a life of ease. She seems to have everything, except her mother. She has no memory of her at all. Kana is bright and on the path to success when she is met with some information that rocks her. Kana finds out that she is a witch. Not only is she a witch, she’s a legacy. She will be attending her mother’s alma mater, Shipton University, to continue her mother’s research. First, she will have to jump through a myriad of hoops to deem herself worthy and learn 21 years worth of magic in a very short period of time.

I love how Kennedy takes such an obscure element and makes it relatable. I’d dare to say that the everyday reader hasn’t done much more dabbling in magic than the occasional card trick. Yet, I found myself sympathizing and relating with many things that Shipton’s students are facing. Kana is playing catch up, trying to master skills that her classmates have long been proficient in. She’s sort of the “low man on the totem pole,” and even though she is catching up quickly, she feels a bit out of place. The same can be said for Vanessa. She’s a master of magic, but due to stifling rules, her magic has been suspended. She’s older than most of the classmates, and also feels like she sticks out like a sore thumb. Even though these two have boundless power at their fingertips, they can still feel small and inept. It seems to be a common theme across not only this story, that no matter how powerful or perfect someone is, self doubt and the feeling of not belonging almost always sets in. These young adults are skilled witches, but Kennedy doesn’t lose their humanity.

Kennedy also piques interest when speaking of the “entity” who continually seeks its “promised” host. We are to assume that the entity is seeking Kana. A dark, elusive, inhuman being is always on her heels. I feel like this can be metaphoric in a way. Kana has a perfect life from the outside, but there is a big mysterious hole in the shape of her mother left in her soul. No one has a perfect life. There’s always an obstacle or hindrance or something in a dark closet in the way of complete contentment and reminds me that no one really has it all together.

Plague of Witches is written masterfully. It’s like the elusive black entity of Stranger Things meets  a crazy cast of characters from Harry Potter. Being a fan of both, I can’t get enough of this book. Kennedy should have no problem gaining loyal readers in this genre. The plot is interesting with its twists and turns and easy but not boring readability. I’d love to read more by Kennedy.