SuperPower: The Ability to Fly or to Become Invisible: The Next Generation (Book #2) 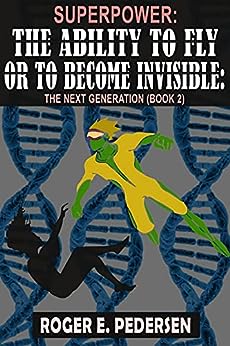 The Next Generation by Roger E Pedersen is the second book in a super powered series featuring Professor Steele’s ‘Golden Eagle’ organization, taken over by his nephews after his disappearance. At the same time, twin brothers take control of the rival group DODGE (Department of Defense Genetically Engineered). Both organizations set out to find talented new recruits with the strongest superpowers, and this book charts the activities of the recruiters who travel the world wielding their power mostly for selfish or trivial advantage. The action culminates in a thrilling air battle bringing all the characters together for a final clash of superpower against superpower.

This fascinating story is written as a series of dossiers, as if recording facts, although it is not clear who is making the records. This is an interesting and original idea that could have been quite successful as a structural technique, particularly with the historical fantasy nature of the plot. However, I felt the structure was inconsistent, as the ‘dossiers’ contained descriptions of actions as well as dialogue.

The story is very detailed and filled with lots of facts and descriptions that serve to create very detailed characters, just as in book one. For example, Brittany’s description of the value of her necklace:

“… many people compliment Brittany on her beautiful emerald, [sic] green necklace. She says, “Thank you. It was a birthday present to me. I’ve always wanted an emerald necklace from Columbia [sic] where the darkish green and most expensive emeralds are mined.”

The Next Generation continues the intriguing story setup in book one and illustrates Pedersen’s painstaking research into the detailed development of his characters. For fans of super hero fiction, or for anyone looking for a book that focuses on character development, you will find plenty of details to dive into in Roger E Pedersen’s fascinating action adventure novel.