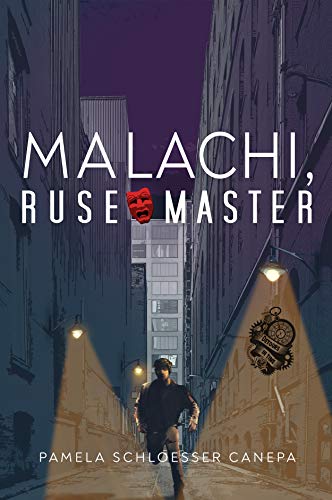 Malachi, Ruse Master is a spin-off to Pamela Schloesser Canepa’s Detours in Time science fiction series. It is a riving mystery novel following the adventures of an upstart assistant to a private investigator. This thrilling coming of age story follows a college dropout named (or renamed) Malachi as he tries to piece together a life using the unique verbal intellectual, and thespian skills he poses. Malachi is offered a job helping a private investigator with shadowy intentions, and the results are alluring.

Malachi, Ruse Master unfolds like a series of separate but dramatic anecdotes that cast a light on people, families, and their relationships. I liked how each chapter was its own nutshell mystery. It was easy to grasp and easy to follow, which I suppose places this book in the young adult genre, but unfairly as there is still some depth to the overarching themes present throughout the novel. I enjoyed the many different ways that Malachi was able to accomplish his tasks. They were always different and creative and something that I think makes this novel stand out from other sleuth novels.

Malachi is trying to eke out a living on the D.C. streets. While not as developed as the setting could have been, I enjoyed how the novel stayed focused on the captivating characters. This, in essence, is a character driven story that follows one young mans motivated rise out of the streets and into an intriguing job that allows his skills to flourish.

Malachi is a character that takes time to build and his journey is something that kept me picking this novel back up. Malachi, Ruse Master is an absorbing private investigator novel that fans of mystery books will surely enjoy. Pamela Schlosesser Canepa has written an engaging thriller that follows a young man with extraordinary talents who grapples with the consequences of life and his actions.