The Family That Went to War 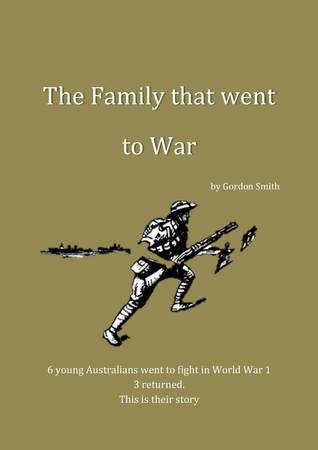 The Family that Went to War is both a family memoir and a history of the people of the state of New South Wales, Australia. The author, Gordon Smith, gives a well-documented account of six members of a family from Cootamundra, NSW, who enlisted into the First Australian Imperial Force (1st AIF) at the onset of World War I. His research in historical archives, newspapers, and memorial societies is well done. The accounts of war and details of each man’s deployment presumes that he also had their war diaries and letters from home to draw on for detail.

The Commonwealth of Australia was still a young country, having formed a federation just over a decade previous. Australians still regarded Britain as their mother country, and when war broke out, Australia’s Prime Minister declared support for Great Britain and formally entered the Great War. Six members of the author’s family enlisted to fight the German army. He tells each man’s story with informative passages about the region they are in, the larger picture of the war that raged around them, and then brings it back down to the trenches where the soldiers fought. Smith’s details regarding ships, armaments, shortages and hardships, and other details of the soldiers’ experiences in Egypt and France will be of great interest to readers fascinated by World War I or the contribution of Australia to the Great War.

One such detail is in the account of Austin Schofield’s experience at Gallipoli. A water shortage, bad weather, and devastating losses motivated the British combined forces to evacuate. In order to safely evacuate, they used subterfuge to trick the Turkish forces into thinking they were still there.

Periscopes were to be propped up, and every effort was to be made to create the impression that the trenches were still fully occupied. … When it was time to finally abandon the trenches, Austin was to help set up some remote firing devices to fire some rifles to keep the illusion that the trenches were occupied. Some rifles had string tired to the trigger and a candle burning until it reached the string. The rifle would then fire.

Though the author writes with detachment, the stories of these soldiers in the midst of historic battles give a glimpse into the life, and death, of Australian soldiers. I was particularly interested in the account of William Power, fighting on the Western Front at Fromelles France. The losses to the Australian forces were described as, “the worst 24 hours in Australia’s entire history”. Though the account is given in a very matter-of-fact manner, it’s hard not to sympathize with the Australian soldiers.

The biggest drawback of this book was a simple case of bad editing. In one case, the name of an Egyptian city is spelled three different ways on the same page. Punctuation is inconsistent and made some passages difficult to understand and hard to follow.

Overall, I think the author has done a fine job documenting both his family history and military history. Despite the dry, academic tone of the account, there are moments of humor and humanity that shine through.