← Death of a Gypsy
Powerful and Very Smart → 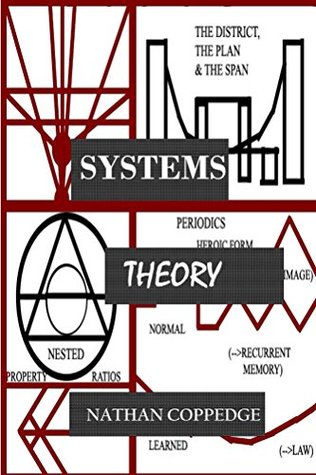 Systems Theory is a collection of philosophical systems created by the author, Nathan Coppedge. Before the table of contents, the author specifies that a friend once theorized that “systems can be formed about anything”. Coppedge seems determined to challenge this assertion by creating as many systems as possible.

This set of systems is broken down into subsets, including formal/logical, archetypal, applied, psychological, aesthetic, and many others. Throughout his text, he seeks to enlighten readers with his definitions of these systems and provide copious examples of these systems at work. While the text is physically over 400 pages long, the text inside is not as long, due to the formatting. So, if you are intimidated by the page length, it is not representative of the amount of content between the covers.

While I’m not one to spend much time on philosophy, I found that some of the systems seemed quite acceptable, while others were derivative of common truths. The ones that did not sit well with me were, perhaps, over my head, but I did find the acceptable systems to be well explained. Regardless, there are probably systems which will mean more to some than to others. It is safe to say that any reader will find something with which they can consider in depth, even if they cannot think in depth about some of the other topics that are a bit tougher.

For example, Coppedge introduces an “Ancient Book Design Program” with the subheading of “Secret Books Formula”. He uses his knowledge of literature and how a book functions as a storytelling device to create a system that helps to name a book and introduce a proper moral. This system, although seemingly unnecessary, puts a framework to the building blocks that writers often use to create stories. It works as a set of ideas and I can understand how this system came to be.

On the other hand, especially in the mathematics portion of his text, Coppedge creates several of his own mathematical operators and explains their uses in detail. However, much of it only holds purpose inside the realm of philosophy. As an example, he creates a “God Variable”, which is equal to infinity plus one or “any value including infinity for each variable”. It serves its purpose inside of the discussion, but examples are not provided for it’s possible uses.

Overall, this text might provide some philosophers with interesting topics of conversation and consideration as they peruse through the lists of systems. Each system has a brief explanation and examples where necessary, allowing most to understand the meaning behind each one.

← Death of a Gypsy
Powerful and Very Smart →