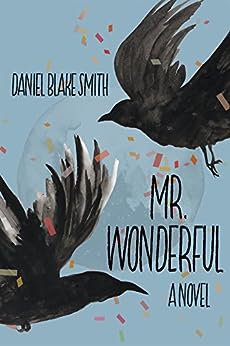 Mr. Wonderful, by Daniel Blake Smith, is the touching tale of Brian Fenton, a college professor in the throes of a crisis like none he has ever faced. Brian and his wife, Corinne, are parents to a thirty-year-old son, Danny. The two adopted Danny as an infant at Brian’s insistence. From the beginning of Danny’s life with the Fentons, Corinne struggles to find her motherly instincts and is, for lack of a better word, relieved when Danny becomes a self-sufficient adult and leaves them as empty nesters. Danny’s return to their home turns Corinne and Brian’s lives upside down as Brian, in turn, deals with his elderly father’s declining health and the increasing pressures of a career he, may or may not, still love.

Smith weaves an intricate story of love lost between parents and children. The first person narrative is highly effective at drawing the reader into Brian’s sorrow, frustration, and his panic at being the voice of reason both at home between Corinne and Danny and long distance as he goes head-to-head with his brother, Jeff, over his father’s care. It is hard to watch Brian ponder the differences between his memories of his father’s treatment of him and his brother and the way in which his stepmother, Claire, speaks so lovingly of Robert, his father, as she cares for him. His emotions are raw, real, and easily relatable.

Corinne–not my favorite character. Her coldness toward Danny and her disdain at having to see him again in her home is as amazing as it is heartbreaking. Danny, not the best behaved boy on the block, is not welcomed by Corinne, and the blame she throws at Brian is somewhat misplaced and a struggle to witness. I found myself wanting her turnaround to come–and to come soon. Smith has written a memorable, if infuriating, character in Corinne.

Brian’s relationship and subsequent discoveries about his father’s past are poignant. Robert, ailing and entering the stages of dementia, is also hard to like. The manner in which Brian describes his past with his father left me wanting desperately to not feel sorry for Robert. Here, again, Smith crafts a turn of events that left this reader feeling a sense of compassion she did not see coming–but appreciated in the end.

I have to admit I saw Brian as weak. I didn’t want to, but I found myself wanting to shake him and jerk him upright from the downhill slide he was surely taking as the days passed him by. By the story’s climax, in Brian’s hometown of Juniper, Texas, I was more than ready for Brian, and Corinne, to show growth. Smith creates the perfect opportunity for self-awareness and life-changing decisions with his choice to bring his characters together in Juniper.

I have to give Mr. Wonderful an emphatic 5 stars out of 5. Smith’s use of the alternating first person points of view creates a deep connection between readers and characters. The Fenton family and their trials are not to be missed.