← Tested and Punished
One Fire Burns Out Another’s Burning → 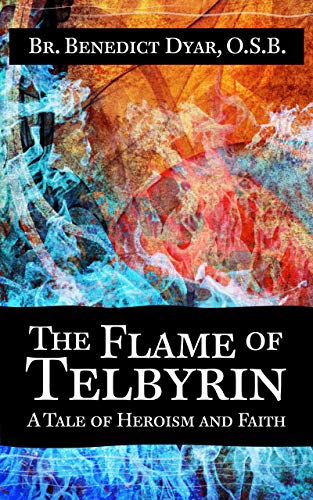 The world of Telbyrin is no stranger to the high fantasy wonders of, Elves, magic, legends, and lore. The story unfolds as our two heroes strike out on a pilgrimage turned epic adventure. No sooner do they leave the confines of their beloved farmland do they quickly run into danger left and right. A fearful evil rises once again in Telbyrin threatening the peace and all its inhabitants. At the same time, the Eternal Flame is found extinguished throughout the land causing panic and dread.

From reading Br. Benedict’s book, I can spot his fantasy influences as well as his admiration for the genre. The plot is straight forward but with that Br. Benedict’s builds an elaborate world that is deftly created with care. The author has clearly spent a good amount of time developing and establishing name and traits for each concept presented in The Flame of Telbyrin. With so much effort gone into creating such a rich world, I would have liked to experience more substance in the writing. The story moves quickly and I quite enjoyed the fast pace of the novel. It added tension and suspense to the plot. But with that came less time to evoke a well-crafted setting and character development.

The Elves, Orilin and his wife Larilyn carry the plot as they traverse the land of Telbryin in search of an answer and hope to the fast-approaching Meldron, an arch-nemesis to the Elvish population. The black and white portrayal of morals between Elves and Meldron sets the reader up for a clear choice of who to root for. I have a sneaking suspicion that this is among the first of a few books Br. Benedict’s has written. The novel keeps the quest like adventure and characters simple and rarely deviates from the commonly used fantasy tropes.

It is evident that Br. Benedict loves the genre deeply and enjoyed developing and building the world of Telbryin. I enjoyed reading this book with the knowledge of Br. Benedict’s hard work and dedication to the novel. The Flame of Telbyrin is brimming with potential to become an epic fantasy novel with intriguing characters. I look forward to Br. Benedict further cultivating his ideas and giving us a fuller view of his imagination. The Flame of Telbyrin was a joy to read and I recommend it to any fan of the fantasy genre that is looking for captivating characters inhabiting an intricate world.

← Tested and Punished
One Fire Burns Out Another’s Burning →