← The Flame of Telbyrin
Wings at Dawn →

One Fire Burns Out Another’s Burning 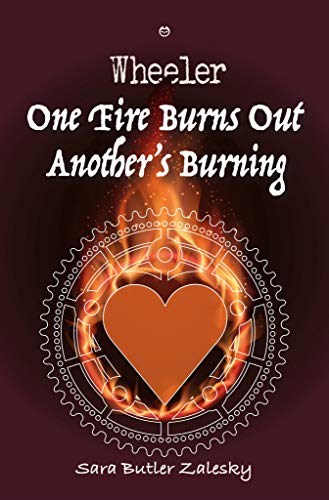 I didn’t realize how much I missed my friend Loren MacKenzie until I picked up One Fire Burns Out Another’s Burning by Sarah Butler Zalesky. It may sound clichéd to refer to the protagonist of the Wheeler series as my “friend,” but over the course of the three Wheeler novels, I truly feel as if I’ve gotten to know Loren as a close friend. This third installment picks up where the second, Wheeler in Darkness, left off: Loren recently experienced a painful trauma and death and is struggling to cope with this recent trauma as well as the trauma of her childhood that has resurfaced. Combine those experiences with her high-stress career as a professional cyclist and status as the girlfriend of a famous celebrity and you have Loren MacKenzie, my friend. As in her first two novels, Zalesky packs a ton of action into the novel’s 270 pages, though the story never feels rushed. Rather, the pages feel as if you’re flying along on a bike with Loren, never knowing what’s around the next corner but looking forward to the adventure.

One Fire Burns should be read after completing the first two Wheeler novels, as Zalesky spends a modest amount of time recapping the action of the previous books. Repeat readers will be thrilled to find the return of familiar faces in Loren’s close-knit cycling teammates, the ever-charming actor Graham Atherton, and other supporting characters. But, Zalesky also adds in a few new intriguing characters, as well as deepens the character development of her existing characters.

Where Zalesky shines in this novel, though, is through her development of Loren. She skillfully develops Loren as a more mature and multi-faceted character. Though Loren has always been complex, this time she is finally able to tackle some of her metaphorical demons that have plagued her throughout the earlier Wheeler books. Loren’s romantic interest, Graham, also receives some well-deserved attention from Zalesky. He’s still the same Shakespeare-quoting heartthrob, but I finally felt as if I got to know Graham beyond his gorgeous exterior. As Loren and Graham develop, so does their relationship into a more serious and meaningful one.

Zalesky also brings back the thrilling, nail-biting race scenes in One Fire Burns, as the novel takes place in the spring racing season. Though I am not very familiar with the ins and outs of professional cycling, I love Zalesky’s electrifying play-by-plays of the cycling competitions. She skillfully pulls readers along the race track with Loren, explaining the strategy involved in cycling while also making the competition relatable to readers who may have never been on a bike. There is something universally thrilling about competitions, and Zalesky taps into this with several key cycling races this season for Loren.

In One Fire Burns, Zalesky offers readers a unique and magical blend of thriller, romance, and sports. As before, Zalesky gracefully handles the sensitive issues that Loren experiences, including emotional and physical abuse and harassment, creating a thoughtful and complex novel for readers.

← The Flame of Telbyrin
Wings at Dawn →