← The Revelations at Black Corners
Honeycake: A Family Of Spices → 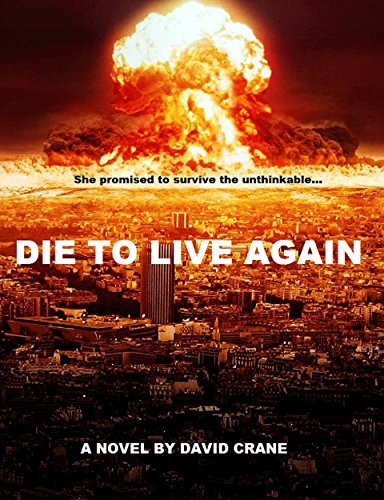 Die to Live Again is a story about Tanya, a young woman whose existence becomes a perpetual question when the world faces nuclear destruction. She is one of the lucky few who survive and for a time she is housed in one of the pre-prepared military shelters. This arrangement does not last. She goes from being a preferred informant for a budding dictator to an outcast, left to survive off the contaminated wasteland. For a while she has Jack, her boyfriend with her. This also does not last as two humans are no match for the unfiltered aftermath of nuclear destruction. Jack dies and she finds herself transformed but surviving. Soon enough Tanya realizes the existence of humanity is under threat and it is up to the survivors to decide what new Earth looks like, this time, with mother nature paving the way.

David Crane combines post-apocalyptic confusion and political drama in some exciting ways in this captivating book. Although most of the action takes place on the American mainland, we still get a glimpse of what happened around the world. This perspective was a very interesting take and political drama lovers will undoubtedly find it engaging.  All of this balances well with the friction between nature and scientific input. There is even a religious aspect that is explored. These aspects are the underpinnings of human existence, and I felt that the spiritual inclusion added an intriguing dimension to this novel. The combination of politics, science and religion makes for a possibly overwhelming experience but I felt that it was balances just enough to never become too much.  Additionally, although there are several drastic turning points throughout the novel, they are rarely, if ever, predictable.

Although this is a well written novel, I felt that there were some inconsistencies in the timeline, and a few things seemed too unrealistic. I  would have liked the buildup and explanations of occurrences to be more robust.

Overall, this is a fantastically engaging novel that I found to be both interesting and entertaining; both things I’m starting to associate with David Crane novels.

← The Revelations at Black Corners
Honeycake: A Family Of Spices →