← The Lord of Long Shadows
It Begins With You → 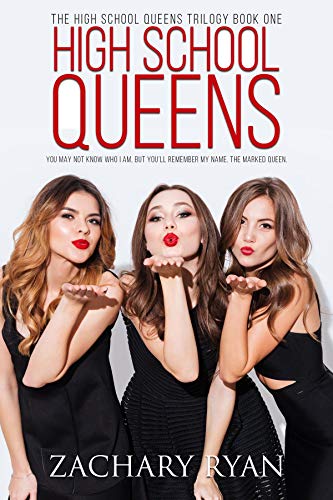 What is it about high school that brings out the worst in people? The hormones, the pressure to know your future, the mind games? Probably all of the above. Zachary Ryan pens his first book in a series, High School Queens set at Johnson Prep, and complete with all the rich, narcissistic, angst filled teens that any drama queen could ask for. This story delves into a darker, edgier version of high school antics, with exhortation, blackmail, physical and emotional abuse. A One Tree Hill meets Lord of the Flies vibe.

High School Queens packs a deep emotional punch and the depth of the character’s issues are interesting and intriguing. The book tackles a myriad of issues: Alcoholism, eating disorders, self harm, family loyalty, abuse and a whole gamut of complex issues that face youth today. Zachary Ryan attributes the necessary attention to these issues with detail and heart equally. However, I felt that there was detail lacking in certain places? What does Johnson Prep look like? The picture of the story feels incomplete for the lack of setting.

Johnson Prep has a lack of diversity, which is not surprising, but the one Spanish character is poor and the one Indian character is trapped in a ultra traditional family. The cliche here is painful because the author has a clear knack for creating intriguing and well defined characters otherwise. Readers can relate to Andrew, Danielle, Aman and Delilah, root for them and become invested in their characters. The endless cattiness and shallowness by the Marked Queen starts as fun and entertaining but gets repetitive where I would have liked to see creative twists.

The climax of High School Queens is set against the back drop of prom, but the character’s stories don’t all end on the same note and there were some surprises that were developed and unveiled superbly. There is a cliffhanger that sets up for the continuation of Johnson Prep’s students but for next installment of High School Queens to match the high bar set here I expect to see more flavor, humor and twists.

← The Lord of Long Shadows
It Begins With You →