← The Haunting of Smock Hill
Chasing the Modronovich → 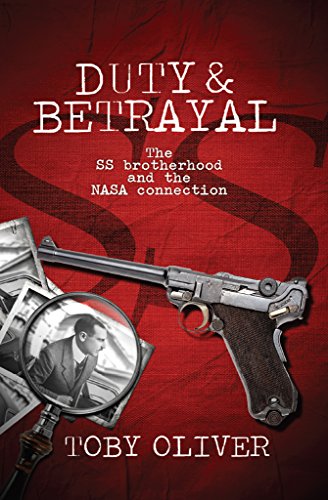 Duty and Betrayal: The SS Brotherhood and the NASA Connection by Toby Oliver is a smart novel that takes place in the early 1960s, following various members of the intelligence communities of the United States and Great Britain. After the end of World War II, the Western powers sought to capture/recruit former Third Reich scientists to advance their own technologies, essentially beginning the Cold War. One of these men, Bernard Zimmerman, has caught the attention of Spencer Hall of MI5 for a very personal reason. Jack Stein of the CIA is brought in to help, and the two get to work. Is the SS still active, even after World War II? Will Spencer be able to act logically and safely in his quest to uncover these men? Then, of course, there’s Joyce and all of the emotions connected to Spencer’s past relationship with her making things even more thrilling.

I really appreciated the dialogue in this novel, which was consistently sharp and nimble. With any historical fiction novel that focuses on intelligence and spying, there is quite a bit of dialogue. Oliver does well to make the dialogue both interesting and logical. The characters are well crafted that each line they speak and each choice they make, I found myself thinking, ‘Yes, of course that’s what he would do.’ It’s so well-written, I would believe the author if he told me that all of these events actually happened.

If there is any weak point in the story, I felt it would be in the first couple of chapters which are heavy on some of the characters’ back stories, but almost all of the information provided in these areas is relevant and useful in understanding who these characters are, making this a very minor issue.

This book reads exactly the way an old school spy movie would play out. No big flashes from explosions or high-tech gadgetry like we get from these stories now. Just operatives using their investigative and deductive logic skills to investigate, interrogate, and do what they can to capture the individuals they need.

This is an exceptionally well written book that is persistently entertaining and compelling.

← The Haunting of Smock Hill
Chasing the Modronovich →