Stuart Duffelmeyer and the Masters of Plagues 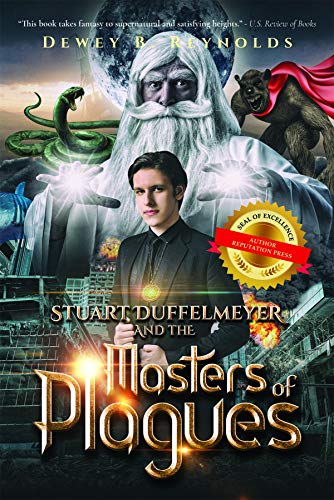 Stuart Duffelmeyer has no idea what is about to hit him. He’s a loner in his own right, a guy with few true friends, and has a complete inability to foresee his own downfall. When a group of “friends” arrange to give him a night to remember, he agrees with no second thought. No one in the room on that fateful day could ever have dreamed that Stuart was deeply tied to the supernatural and protected in his most vulnerable moments by forces more powerful than anything any of them had ever seen.

Stuart Duffelmeyer and the Masters of Plagues, a novel by Dewey Reynolds, lays out the experiences of one Stuart Duffelmeyer–a successful young man who yearns for a relationship and genuine friendship. Stuart is easily coerced and falls for almost anything. When he agrees to meet up with the group of his NYU classmates at a hotel, he is unknowingly walking into a trap. What they don’t know is that Stuart is covered in a veil of protection none of them can see–even Stuart.

Reynolds takes the story of a bullied man to a whole new level. With the introduction of the supernatural via an alienesque rat, the author gives his main character a unique depth. I have to admit that I didn’t see this aspect of Stuart’s experience coming in the first few pages. The author blends the supernatural into the story line quickly and smoothly.

There are eight characters in addition to Stuart who play an important role in his demise. Any more than three key characters tends to cause confusion for readers. I found myself rereading and double checking myself as I tried to keep these eight characters straight. This, along with the repetitive nature of some dialogue and exchanges, keeps this book from being perfect.

Reynolds does a magnificent job of developing Stuart’s character throughout the story. A clear picture is painted of a young man who is isolated, ridiculed by others, but grows increasingly determined to change his life. Nowhere else will readers find a weak character more strongly developed, nor will they find a better example of overcoming bullies.

Stuart’s otherworldly experiences make his story even more enthralling. The powers he is offered are representative of the power inside the victims of each and every bully. By creating a fantasy with a relatable main character, Reynolds has given readers a new kind of hero–one who is strong in ways readers can not only appreciate but cheer.

Fans of fantasy and those who yearn to cheer for the underdog will find a new favorite character in Stuart Duffelmeyer.