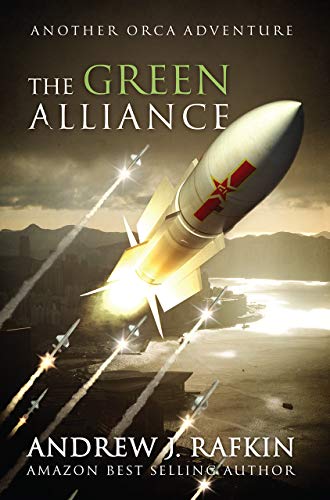 The U.S. has to defend itself and the world from extremist organizations and political tyrants yet again. The Green Alliance, a well-funded radical environmental group leads America’s formidable enemies this time. The group’s plans to tackle global warming are causing serious climate changes bordering on a mini ice age in Europe and North America. The Ocean Reconnaissance Commission and Associates, a renowned private security firm is called in to stop them. ORCA tries to juggle this new mission with an existing one that required it to track down and eliminate the killers of top government officials. To further complicate issues for ORCA and the US.., China attempts to take back Taiwan yet again. With this, ORCA and the U.S. find themselves fighting multiple simultaneous battles in a frantic race to preserve world peace. Will these battles prove to be insurmountable even for the world’s number one superpower nation and the globe’s leading private security firm?

The Green Alliance is the fourth book in the ORCA series by Amazon Bestselling Author, Andrew Rafkin. The events are set in the 21st Century, accompanied by a peek into the near future. Places and political structures are real but we see the introduction of intriguing advancements to familiar technology like Artificial Intelligence and nanotechnology. Rafkin’s skill at mixing fictional characters with real places, and politics and technology, give this book a thrilling yet relatable feel.

Rafkin crafts his story around several themes including the United States’ affinity for standing up for itself and the possibilities that man’s tinkering with technology could create. For example, ORCA with their highly sophisticated supercomputer; MOBY. I personally enjoyed all the cool weapons and gizmos used in the book. The story also sheds light on modern environmental problems and the opportunities we have at escalating them into serious global crises in the coming years; eco-terrorism and power struggles among nations. I also enjoyed the way cute love stories were plugged in amidst all the chaos.

Rafkin’s work also proved to be incredibly informative, but in a fun way. Think of learning about seemingly drab concepts like climate change and the propulsion systems of sophisticated boats while being distracted by a riveting plot, now that’s what I call learning made easy. Also, conversations are filled with light-hearted banter and interesting interactions that help to portray the characters, especially members of ORCA as humans and not just ice-cold killers or superheroes in the Superman class. Although, some of the explanations on boring concepts seemed redundant and there were places where characters recounted entire experiences that readers were already privy to.

The Green Alliance is a thrilling action adventure story that kept me entertained to the last page.