Time For The World To Learn From Africa 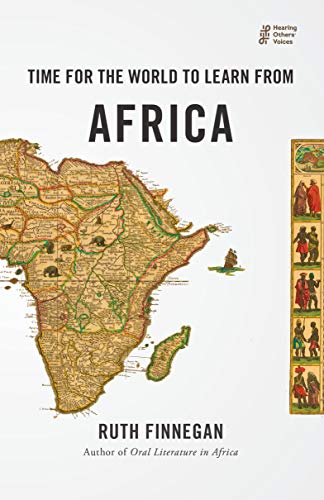 Time for the World to Learn From Africa by Ruth Finnegan is an educational book that brings forth the historical and characteristic details of Africa from the perspective of a seasoned academic and researcher. Ruth Finnegan provides great insights into the African civilization and authoritatively correct widely held misconceptions about the cultural, artistic and educational foundations of the prestigious continent. She does this by tendering empirical evidence both from her research and the documented findings of others; including African academics.

Finnegan’s plunge into the intricacies of the cultural heritage of the 2nd largest continent isn’t without credible basis. Her solid educational background in the humanities, combined with the experience she garnered while living and teaching in Africa helped set the stage for this well structured and informative book. She divides the book into 11 parts, 10 of which are dedicated to specific cultural and artistic aspects of Africa. She begins her journey to set the records straight by first attacking the notion that all cultural subsets of the African civilization are fundamentally alike. Finnegan debunks this misconception by citing examples of multiple African cultural groups that differ in their social, religious and economic forms.

In subsequent chapters, Finnegan backs up her claims that there is much for the world to learn from Africa by delving into the traditional, historical and often overlooked artistic archives of the continent. Her first stop is the literary uniqueness of African cultural groups. Here, she discusses expansively the nature of African literature; pointing out that members of that civilization while not abandoning written literary works, favored oral literary forms and performing arts. I enjoyed this part more than any other because Finnegan doesn’t just treat the subject superficially, rather, she digs deep and supplies detailed information on Africa’s admirable oral-literary expeditions.

Finnegan then proceeds to touch on another of Africa’s intriguing peculiarity: language. She’s quick to highlight the complexity and varying dimensions of African languages, refuting the claim that African Languages are on the whole primitive and devoid of the structure of their western counterparts. I savoured this part as I got to see the enthralling bits of African languages, especially their extremely tonal nature.

The next chapter looks at the place of panegyrics or praise poetry in African traditions and how the vastly stylish literary components of these praise songs or chants are inspiring to both African and non-African artists. In other chapters, Finnegan assesses other deeply entrenched cultural components of African civilizations including the creative use of drums for communication, the intriguing bond that exists between musical performance and dance in Africa, the elaborate attention given to names and the naming process, the role of proverbs in African communication and a host of other captivating African themes.

Finnegan’s attention to detail and comforting simplicity ensures that even high school students can benefit hugely from her findings. She writes in an engaging tone and pulls you tenderly through the pages of the book by using her sharp storytelling skills, allowing you to enjoy your exposure to the cultural and historical details.