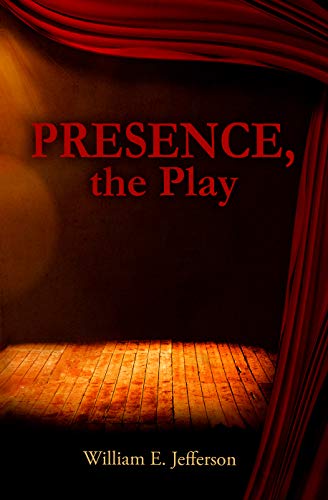 Presence, The Play is an intellectually invigorating tale that plays with the imagination and words itself. Script is a Brother in Estillyen’s Sacred Order of Storytellers, an ancient order of monks dedicated to telling the stories of the world and creating them. Script’s play, Presence is about to open in the Theatre Portesque, but tragedy strikes. Script is thrust into a world in which not everything is clear to see and he is tasked with a very important mission that will place him in Hell itself.

The concept of Presence, The Play is similar to Alice in Wonderland in the complete creation of a new world with its own laws and wording that can be literal and metaphorical. However, the book is not the typical Alice in Wonderland story in that our hero, Script, controls his own fate and learns to navigate this new world. There are hidden meanings within Script’s journey that he unravels and applies to life. Another element of the book that makes it so interesting is its religious aspect. The religious ideas never become overly didactic, but it is applied in a unique perspective, particularly as it relates to the power of words and stories. Another element of the Alice in Wonderland style narrative is that in the end, the reader is left questioning how much is real or imagined.

The themes explored in this contemplative novel are intriguing. The book is a great reminder of the power and importance of words and stories. The religious undertones enhance this message as well by emphasizing the power of ancient stories and lessons. Furthermore, the book seems to impart the lessons of rejoicing in art and literature and sharing them with others or being kind to others in this age of social media. In a world where the power of art is diminished by media every day, this book is a powerful reminder of the potent messages art carries.

Presence, the Play is a thought-provoking story that is well-written, has great characters, and a great message. If you enjoy uniquely expressive novels then this imaginative story is for you.