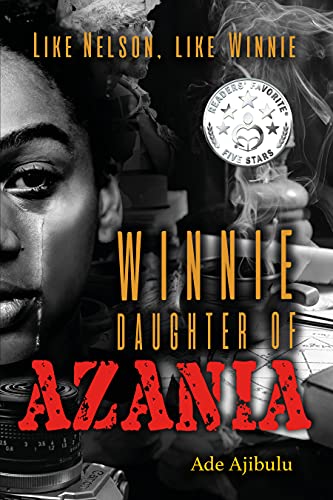 The story is set in South Africa. Ajibulu writes rich descriptions of the landscape and villages. The community of Azania is described in detail, from the statue at the entrance way to the single water tap that was donated by a white philanthropist. Farmlands are described, in terms of the physical characteristics of the land and its importance to the community and the pivotal part land plays in the politics of a nation. Ajibulu describes a setting that is not only beautiful, but also tortured. A community barely managing to survive – yet visited by tourists, and influential politicians building beautiful houses in the center of squalor. The setting immediately draws the reader into the Araznian world, capturing the reader’s imagination.

There are a handful of important and intriguing characters in Winne – Daughter of Azania. Jacky, Honorable and Kurt are all dangerous criminals who kidnap young women. Winnie, on the other hand, is a strong, but kindhearted sixteen-year-old girl. Winnie is the ultimate female protagonist. She captures the reader’s attention immediately with recounts of her kind deeds. She is endearing and I also liked how her character slowly evolves throughout the course of the novel, but most importantly I liked how her character does not rely on anyone else. She is a strong and independent young woman who challenges the gender roles and stereotypes of her world. It was refreshing to see such a strong female character. These characters are brought together by a witch doctor. The witch doctor is a symbolic character. Although pivotal in the story, he exists to remind the reader of the evil that exists in our world. We see that the witch doctor is well versed in manipulating others, however when he meets Winnie the lines between the manipulator and the manipulated become blurred.

Winnie – Daughter of Azania is a quick read with vivid descriptions and an enthralling protagonist that immediately draws you into the riveting story. The characters in the story are well developed and I could see that they reflect different types of people that make up society. Author Ade Ajibulu provides readers with an engaging story that delivers thought-provoking commentary on societal and political issues through the eyes of a strong female character.