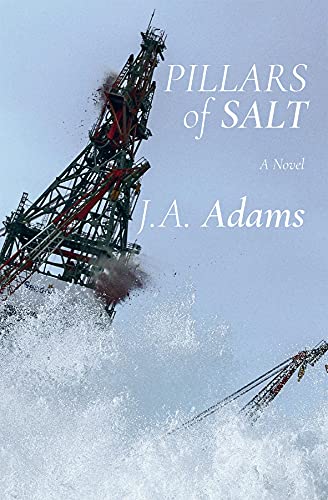 Pillars of Salt is J.A. Adam’s debut thriller which follows the exploits of Harvey Junior, or H. He spends the novel trying to figure out what happened to his father who apparently committed suicide following a major accident at his salt mine which killed 13 people. H, knowing his father’s personality, is adamant there is more to the story and foul-play to be uncovered. From the first page, the reader is overwhelmed with the context and intricacies tangled within this intense corporate world Adam depicts. They portray Louisiana in a way that is so intimate and familiar; every location and setting is truly brought to life by Adam’s beautiful descriptions and attention to detail. Adam’s spent many years teaching at Louisiana State University, and their love for the state is truly evident in the story. Their depiction of the characters in such a personal way helps to easily elicit empathy from the reader; they are likely to feel connected to the characters in both the ups and downs of the narrative.

The narrative Adam tells is a near-flawless contribution to the thriller genre as a whole. The book is inundated with the most interesting twists and turns, including several plot twists that are guaranteed to keep thriller fans firmly on the edge of their seat in crippling suspense. One aspect I particularly enjoyed was the overall depth of the story- it’s one layered with so many details, conspiracies, and corporate scandals that add to the plot exquisitely. There is no chance that anyone reading this story will get bored, it’s unbelievably captivating.

As someone with relatively limited experience of corporate greed and the dark reality of business corruption; it was fascinating to follow H as he navigated all the difficulties and enemies in this narrative. As both H and his surroundings were fleshed out exceptionally and so effectively brought to life, the struggles H faces, and the narrative overall, felt very real and suspenseful.

Pillars of Salt is a riveting political thriller, colored by the southern backdrop, and held together with a compelling protagonist.