← Beneficial Accomplishments of Joe Biden
To Understand Myself Better →

The Stars in April 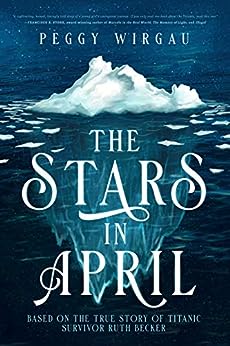 Peggy Wirgau’s The Stars in April is a work of factual fiction recounting the journey of Ruth Becker, a survivor of the Titanic shipwreck on April 15, 1912. Due to the illness of her little brother, Ruth Becker must move from her birthplace and abode, Gunter, India, to Michigan. She is indignant at the prospect of her new and uncertain life in a foreign country, away from India, and her loving friend Sajni. The Stars in April follows the story of Ruth as she embraces the possibilities of a new beginning, her encounters with interesting people she meets along the voyage, and her experiencing the wonder of the magnificent queen of the sea, Titanic.

Though their presence may be brief, the novel presents the reader with some beautiful and interesting characters. Throughout Ruth’s significant voyage, the reader witnesses her change from resentful to a selfless individual affected by the people she meets. In the company of his equally generous father, Michael, the acrobat and unschooled boy of Ruth’s age, shows the wisdom he has gained during the years performing in a circus around the world. Also, while the three characters Natalie, Millie, and Elizabeth portray fashionable women of the time, who are eager to embrace the world with a receptive eye, Mrs. Becker’s astonishment at these women’s independence betrays her desire to be one of them.

By blending the facts from Ruth Becker’s life and the accounts of experiences gleaned from the internet, together with the additional elements of fiction, the author has woven a riveting historical fiction novel. I find myself exploring the deck of 1st class alongside Ruth, dancing in 3rd class with Ann, and experiencing the thrill of the Titanic, thanks to the fascinating and detailed accounts. Ruth and Michael’s eccentric habits are also great observations by the author of human behavior. Ruth’s habit of humming when stressed and Michael’s impulsive wrist-flexing when anxious are thoughtful ways to humanize these characters and make them feel real and sympathetic.

The reader is taken along, from Ruth’s anxious anticipation of what lies ahead to her anticipation of a fresh start with gratitude and eagerness. Ruth Becker’s last sky report in her journal, where she describes a clear and starlit sky instead of the constellations and the ancient tales associated with them, apparently illustrates her desire to paint her own story against the big horizon of the sky in her new life.

The Stars in April is highly recommended to readers who would love to explore the Titanic with Ruth Becker. It encourages people to accept and explore the new and unknown paths God has laid out for them without questioning his will, as the opportunities to encounter extraordinary people and experience significant things in life would never arise if one remained stationary.

← Beneficial Accomplishments of Joe Biden
To Understand Myself Better →