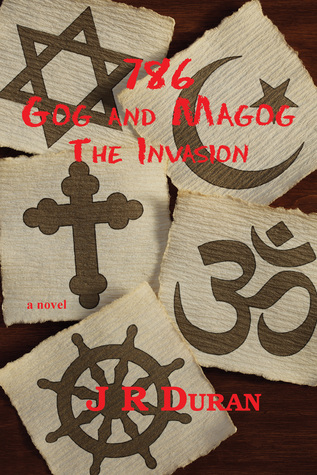 When two family men have the same vision to take their family and move to the mountains because of a possible impending doom, a destructive force, one locked away centuries ago by a wise king, wreaks havoc as it attempts to bring the apocalypse. But, families and people across the world, whether through years of preparation, or quick thinking, fight back. They get help from many different sources including human ingenuity, natural occurrences, and even the grace of their savior.

The story of people of the modern/future time of 2034 dealing with a worldwide crisis can be a deep well for inspiration. However, “The Invasion” chooses to only sip from this deep well sparingly, and in small doses. The book starts easy enough with an introduction to a long ago time, and a king bringing his faith to the people of the world. After coming across a village living in constant fear of a marauding tribe, he orchestrates the building of a wall, and traps the invaders behind it. After a jarring shift in the timeline to 2034, the tribe is accidentally released, and they bring a wave of chaos upon the world. Now, if the story were that simple, a monster that brings about the end of world, the book would be fine. However, gory descriptions of terrifying creatures consuming the earth does not equate to compelling main characters or a plot with purpose. Inconsistent writing, numerous plot holes, and an ending that seems more a decision to stop typing, rather than wrapping up any of the character arcs or plot threads, seriously hampers the flow of book. There is no character development, the settings jump around, and the plot is predictable from the first few sentences. The characters, inconsistent in both their introduction to the story and often just as abrupt exit from it, do not help the story along at all.

The reader is introduced to many characters through the story. From two like-minded families, to criminals breaking out of jail, to world leaders, no one is given any kind of development beyond what their name and occupation is. The actions of the characters in the story are confusing. Half the decisions made in the book are not based in reality, and the other half are contrite and cliché. It doesn’t help that the justification of many of the characters’ actions is the whole supremely overwhelming overtone of the book itself – faith and religion. It is not clear whether the inclusion of religion is meant to present a positive or negative viewpoint to the reader. A king conquers a town in the name of a “one true god” while threatening to raze it and all its inhabitants to the ground if they do not convert, but we are left to wonder whether we are to hate this character, or embrace him. Religious families forewarned of the impending doom in visions spend a year preparing, but warn no one else, not even their friends or neighbors. In fact, the characters that are faith-driven end up more robotic than the monsters that only want to kill.

Overall, this book is riddled with numerous grammatical errors, misspellings, and repetitive sentence structures, but its most obvious error is in it’s overabundance of telling instead of showing. Dialogue, settings, and a curiously large amount of detailed meal descriptions, are given without letting the characters show their reactions, their thoughts, or their desires in anything other than the author telling us straightforward in third-person perspective. By only telling, instead of showing, the characters are not relatable. The book needs heavy editing, and complete upgrade of the characters, in both quantity and quality.

Posted in Book Reviews, One Star