The Vatican Must Go 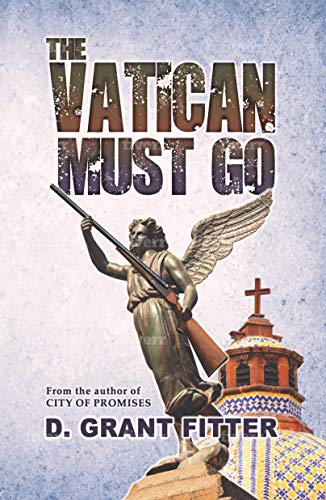 D. Grant Fitter created a thrilling political that is story full of intrigue, mystery and drama. Fitter’s writing is lyrical and complex and will leave you astonished with the darkness of some moments and how faith on the other hand can be so wonderful. The humans won’t take chances when it comes to survival and we will be in the front row watching a religion versus political war.

The Vatican has always had a greater power in Mexico’s culture and daily life. The United States of America was deeply concerned with the church’s influence in their democracy so they sent a mercenary force to represent them. Little did these mercenaries know that they would find themselves in the middle of a dark and terrible war.

Rosa is without a doubt my favorite character and I am sure that she will melt all the reader’s hearts. For the people that don’t know Mexico and are quite interested in it, this is an awesome book since Fitter also provides us with some facts about the country, past and its rich culture.

Don’t expect this book to be a simple historical novel, because you will find so many different topics: war, democracy, family and exploitation. You can expect a roller coaster of emotions. It is well paced and masterfully written. The Vatican Must Go is a riveting historical fiction novel that takes some intriguing character to the cusp of war against a nefarious government that attempts to abolish Catholic control over Mexico.