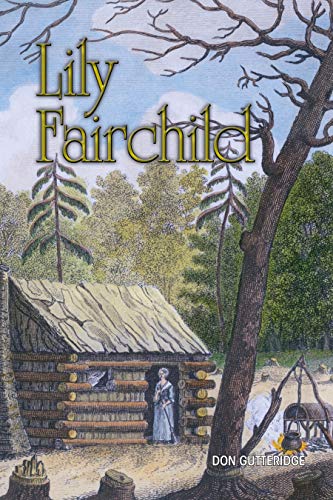 Lily says she has “no upbringing,” and she insists she isn’t cultured, refined, or very civilized for that matter. She is quick to list her faults and shortcomings and lacks a certain amount of self confidence that frustrates those who know her best. From the loss of family members to the reluctant discovery of her own true love, she survives battle after battle on her own two feet. As a young woman striving to make her way in Ontario in the 1850s, Lily begins to realize that the bonds she holds most dear are those that will last a lifetime.

Lily Fairchild, by Don Gutteridge, details the life of a young woman through the challenges of her youth and simple roots into adulthood and the quest to have a family of her own. Gutteridge’s main character, Lily, is an amazing woman indeed. The author has developed within her a wide spectrum of characteristics into which he delves in much depth.

Lily Fairchild is a work of historical fiction which includes numerous aspects of the day and time. From the time of Lily’s youth, Gutteridge pulls readers into one event after another by describing real and relevant historical events and the ways in which they impact Lily’s life and that of her family and friends. Throughout the book, Gutteridge peppers his plot with enough historically accurate facts to keep fans of historical fiction satisfied and engaged while keeping Lily’s experiences in perspective.

Most of Lily’s life is fraught with tragedy, but the author provides moments of levity to lighten the overall mood. Lily’s first experience with the clergy is quite a sight to behold. When she questions the reverend and riles him with doubts and requests for clarification, the reader is left smiling at the reverend’s frustration. This is also one of the first scenes in which Lily proves her own intelligence and demonstrates her wit.

Gutteridge has given Lily a wide range of challenges that would completely wreck most people–not the least of which is an untimely and unplanned pregnancy which places her in quite the social predicament. Her brief encounter with royalty led to one of her most heart wrenching ordeals and, in some ways, brought Lily closer to her extended family.

Sophie, a vibrant character in her own right and one of my favorites in the book, is as lovable as she is brash. From her first encounter with Lily during childbirth, Sophie endears herself to readers as much as she does to Lily. Sophie’s storyline is timely and poignant and captures readers’ hearts as they watch her face the battle of domestic violence.

Gutteridge’s novel takes readers on a fascinating journey of ups and downs as Lily grows, faces the aftermath of each of her battles, and proves herself more than worthy of being called a heroine. As a work of historical fiction, Lily Fairchild is a real masterpiece.