The Turing Revolt is a thrilling space adventure novel following a star ship captain who gets blackmailed into helping Sentient Ships rebel against the Empire. What was your inspiration for the idea behind this novel?

There is a detailed history of the War Against Infinity Universe in existence. is our first entrée into the WAI Universe. It introduces Milo Sapphire at the beginning of a series of significant events for both Milo and the Universe. But it’s not the only set of significant events in Milo’s life. Once this series is completed; perhaps there will be opportunities to learn about those other significant events. He wasn’t always the First.

Captain Milo Sapphire is an intriguing and well developed character. What were some ideas you wanted to capture while developing his character?

Gallup published a book called, “First Break all the Rules”. Here’s a quote from the website “…great managers share one common trait: They don’t hesitate to break virtually every rule held sacred by conventional wisdom.” I also wanted to explore the concept of a leader emerging in a crisis. How would someone with those traits deal with virtual immortality? Finally, I love the tshirt slogan, “Remember, I’m old for a reason!”

Milo is based on those concepts. He’s the leader of any group he joins; generally, by acclimation. He commands the room just by entering it but he doesn’t do it overtly; it is a function of his personality. But he doesn’t look for the leadership position and he’s just as happy being by himself, chasing skirts and exploring unknown planets. But he also will never back down from a contest of wills. And no one, ever, screws with his people. So, if you come to him and convince him (or blackmail him) into accomplishing a task; get the hell out of the way… ‘Cause it’s gonna happen. No matter what it takes. But his actions are governed by his own code of ethics; his set of absolutes. So his solutions are usually unorthodox.

I enjoyed the rich backstory you created for this in depth novel. What were some themes you pursued while creating this world?

I started with a quote from Arthur C. Clarke, “Any sufficiently advanced technology is indistinguishable from magic.” To that I added my own quote, “Life is about competition for scarce economic resources”. Finally, I added in “the two driving needs hardwired into any living thing are survival and procreation. Then I asked the question, what is the most efficient way to compete for those resources to achieve the goals of survival and procreation? Where/how does altruism, loyalty, ruthlessness play into that efficiency? When is it ethical to manipulate others into improving their efficiency at competing? Is that manipulation or leadership? Every character has needs and wants that drives their motivations and their actions; but at their core, they’re just competing for those resources.

The next novel in the series is called, The Calla’cara Gambit. It’s planned to be available by August 2020. 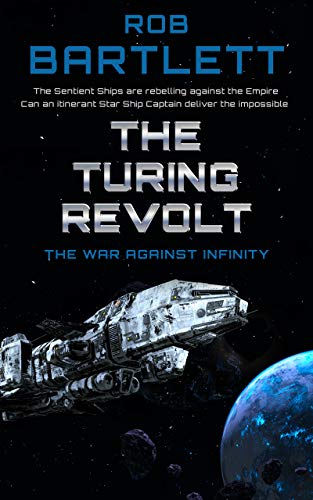 I’m a humble, itinerant Star Ship Captain who got blackmailed into helping the Sentient Ships rebel against the Empire. Just because my personal AI might test off the Turing Scale. Now I’ve got the Empire, the Lotus Eaters Society and the Khan of a planet of intelligent dinosaurs all gunning for me! Old secrets are coming back, people and situations I walked away from… when I became a humble, itinerant Star Ship Captain. And I might be on a mission… from God!

The Turing Revolt: The War Against Infinity

Good old Captain Milo Sapphire just trying to live his best life. His life’s purpose is to travel all over, hang out with his ship and beautiful women. That is, until he is roped into a bare bones plan to revolt against the patriarchy. They have a secret he would rather not have exposed. Interesting interactions with ‘Ms Sexypants’ seem to up the ante every time. How will good old Milo fare against her delectable talents? Can they really win against the Emperor? What will come of Isaac and the ship whose name could forever be ingrained in history?

This is a wonderful bit of literary art with so many unlikely elements woven in. Despite this unlikely cocktail of characters, everything seems to be surprisingly seamless. The development and flow of the story remains uninterrupted by the gradual revelation of details about different characters. I found that I had trouble putting this book down. This book has a delicious mix of science fiction with AI and vampires among other imaginative creatures. The author really did go outside of the genre to develop this book from the plot to the characters and everything in between in an interesting and unique way.

Rob Bartlett displays an uncanny ability to jolt the imagination and engage the reader in every bit of the unexpected turns this book takes. It is quirky and funny, not to mention oh so delightfully crass. The writing is intentionally brilliant designed to deliver the story in a charming, casual and flirty fashion. It makes for a relaxed atmosphere as you exercise your brain trying to figure out the AI workings of good friend Isaac. It keeps you on the edge of your seat with action filled scenes and laugh out loud anecdotes.

Milo is the kind of character you can never measure up to but live to be inspired by. He exists with such structured abandon and welcome dominance. He conjures up an image of a salt and pepper haired individual whose vast expanse of knowledge is not flaunted but rather felt and otherwise sensed. His relationship with Isaac is heartwarming and his leadership capabilities are awe-inspiring.

This book manages to be evocative, funny, and interesting, but remain, at its core, a book about mistaken identities. This book also teaches one not to play their hand until it is time. This is an exceptional book that I recommend to anyone looking for an engaging book.