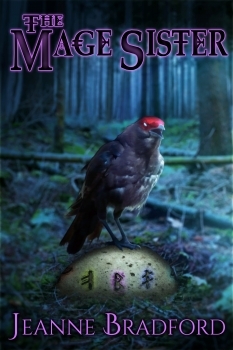 Arinda has been in hiding for her entire life. While nearly everyone in her little town of Amok can learn the simple magic spells that make everyday life simple, she doesn’t dare try. If the townspeople discover that she’s an actual magicker, she’ll be enslaved by the Circle of Mages for the rest of her life. Her Nanny raised her with dire warnings about the evil Mages and protects her so well that not even her parents know her dark secret.

When their parents send them to a boarding school, Arinda and her elder sister Amaris are on their own. The Headmaster, Jahx Rife, seems to take a keen interest in Arinda, and she’s desperate to keep him from discovering her magic. Of course, things go awry, and Arinda confronts her worst fears. Her suspicion and anger might blind her to the intentions of the Circle of Mages, but some of what her Nanny told her has a veneer of truth. There’s someone she should be afraid of, but her stubborn nature may keep her from seeing the threat for what it is.

Jeanne Bradford offers a Young Adult novel that is entertaining, fast-paced and full of intrigue. It’s almost heartbreaking when Arinda faces hostility and rejection, and digs in deep to defend herself from all of the perceived threats around her. In her eyes, everything her Nanny warned her about is coming true. She’s a stubborn young woman and she’s determined to keep herself free.

The world building here is excellent. I was prepared for a story about magical boarding schools, but the author surprised me and took the plot in an entirely different direction. The setting is intimate, a small kingdom founded many centuries ago by people who “came across” from another place. The wilds are full of magical creatures, and small spells and devices are commonplace, but greater magic is feared. Mages can command powers from many branches of study, and readers learn about the use of magic and its dangers right alongside Arinda.

There’s a large cast of characters. Alongside Arinda, Jahx, King Nathan, and Cullen are the members of the Royal Household, other Mages, and a nasty piece of work named Sebastien. He and his cronies are young, arrogant, and perpetually in disgrace. Sebastien makes a perfectly nasty antagonist for the novel, exploiting weaknesses in the Mages’ ranks and determined to take Arinda as his own. A strong book needs a strong antagonist, and Sebastien does not disappoint.

One thing I found troubling is that so many of the conversations were contentious. It felt like nearly every time two characters spoke to each other, someone wound up shouting, back talking a superior, speaking rudely, or getting angry. There is a lot of dialogue in this book, and when so many conversations are highly emotional or held at top volume, it diminishes the impact of the situations they’re discussing.

I enjoyed The Mage Sister and recommend it for readers 14 and up. The novel leaves enough room for a sequel, but it will easily stand alone as a complete tale. Like many fantasy novels, the themes of learning to trust, leaving childhood behind and joining together for a common cause are strongly presented. Check it out for yourself or for your favorite stubborn, self-determined teen.