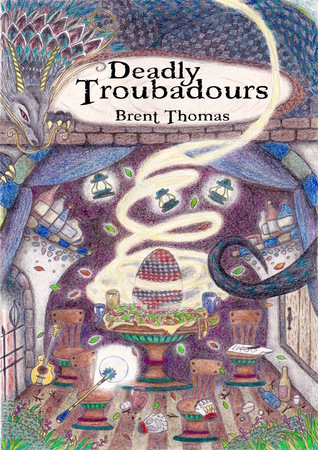 Who doesn’t love dragons? And sword fights peppered with magic and intrigue? Brent Thomas delivers all this and more in his novel Deadly Troubadours. We start our tale in Coal Town where legend has it a remaining dragon sleeps. These creatures haven’t been seen for decades and the mining town mills about their mundane business without tempting fate. As is fitting for any tale of such magnitude a group of travelers appear on a dark and stormy night. The quartet has a resident bard who immediately sets about wooing the crowd of the Black Canary while they investigate for information about the fabled dragon. What is revealed to be a quest borne of drunken excitement turns into a real fight for their lives. The Deadly Troubadours themselves have come to the town to seize proof of the dragon: an egg. They must also live to tell the tale or face scorn from their fellows of the Stone Prince.

Thomas does an excellent job balancing out the story. He starts with information about the main aspect of the story: the quest to retrieve the dragon egg. We are introduced to four characters: Kestra, the lone female, Aleksander, our friendly bard, Demetrius who deals with all things magic and Talbert; our ex-academic. Instead of delving into each character’s backstory right from the get-go, Thomas breaks it up. He’ll deliver one chapter on backstory and then return to the main story line. He’ll mix it up until the readers are surely satisfied with the agonizing pasts our Troubadours have had. All our Troubadours, save one. The origins of the resident Master of Song, Aleksander, are never revealed. He is left a mystery to the reader as we’re not sure how he came to be a part of their world.

When it comes to storytelling, Thomas does an excellent job. The beginning of the tale is full of description and little dialogue. In the first few chapters this is preferred as it helps set the tone of the story and divulge information in a stylistic way. His descriptions are vivid and allow the reader to imagine just what the characters and setting could possibly look like.

Not only do we learn about the quartet, but we also get to read a few chapters from the perspective of the dragon. We learn that the dragon is female and is driven by a very realistic, and humanistic, urge to retrieve her child. What follows is anger, bloodshed and waves of flame.

Even during fighting scenes, where a lot of fantasy-adventure stories can fall flat, Thomas doesn’t go overboard with his descriptions and makes it easy to imagine the fight. Nothing is excessive and his range of vocabulary help keep the tale fluid. The magic is also described with such attention to detail but without being unnecessary. As readers we understand the weight using magic can place on the user as well as the extent of its power. Magic doesn’t feel forced or overly convenient. It feels like it belongs and that can be very tricky to pull off, and Thomas does it well. You won’t be disappointed.