← Paroxysm Effect
The Lovey-Dovey Stuff is my Favourite → 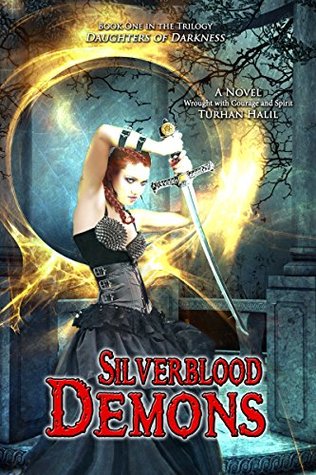 There are reasons why you should be afraid of what goes bump in the night. Our dreams are not always our own and the thought that we may be visited during our sleep is an idea that Turhan Halil explores in the novel Silverblood Demons. Our protagonist, Kylar, is faced with the strange reality that perhaps those overtly sexual dreams he has been having for some time have produced something he wasn’t quite ready for: daughters. Now that he knows about their existence it’s up to him to save them from the demonic world where they have been raised since birth. Kylar learns that demons are very real and that they are more than the stuff of fairy tales and legends. In an almost whirlwind fashion Kylar is plunged into this unexpected quest to rescue the daughters he never knew he had.

While Silverblood Demons is formatted much like a Young Adult novel, the contents are quite above what the average fourteen-year-old should be reading. Love is had and love is lost in the pages of this book. Our protagonist finds himself a father at the tender age of twenty-three. The story is involved and there don’t appear to be any characters created just for the sake of creating them, which is a downfall many authors can find themselves in with such a large cast. Everyone has a role to play and they do so quite well.

However, the tale can be very confusing. The first chapter alone contains such a whirlwind of events it leaves the reader wondering what just happened. This is caused in part by the overly relaxed language used and the sheer strangeness of the events that occur. I feel that a good editor could of helped this novels pacing. The unquestioning nature of those around Kylar as he tells them about his plight to rescue demonic daughters from hell creates an unrealistic atmosphere which can detract from the story. Everyone is too nice, too accepting and too readily involved in such a bizarre turn of events.

One way that Halil shines is the imagination it would have taken to concoct this story. The descriptions are quite well done and the way the characters are all tied together is quite neat. Certain relationships are important in the story and the idea of parenthood is a whole lot easier when your daughters are teenagers. But there’s another quest intertwined with Kylar retrieving his kin. Something that will leave readers quite surprised.

While the grammatical errors can make reading Turhan Halil’s Silverblood Demons difficult, if you’re looking for a light read that you don’t have to think about too hard, you won’t be disappointed. There’s something for everyone: romance, sex, adventure and mystery. It’s a perfect little package wrapped up in not-so-lovely paper. Keep in mind that this is book one in a trilogy so whatever questions you may find yourself asking at the end will sure to be answered by picking up the next volume and giving it a read.

← Paroxysm Effect
The Lovey-Dovey Stuff is my Favourite →